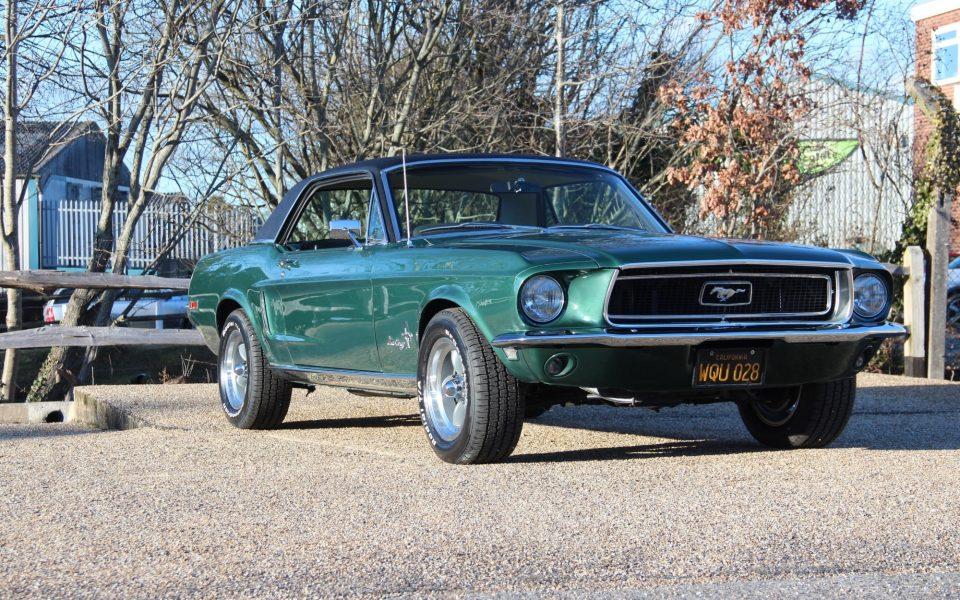 Reminiscent of Steve McQueen’s 68 Fastback in the most famous car chase of all time from the now iconic film Bullitt, this beautiful Highland Green Coupe is equally exciting as those scenes shot in San Francisco. 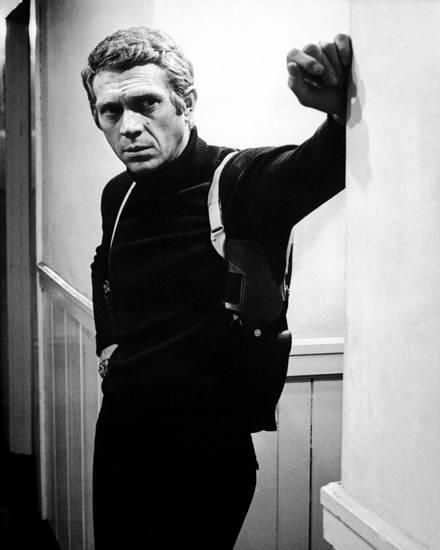 Figures show that sales did go down in this year throughout the range, but Ford still managed to sell 870 Mustangs a day, that’s not bad going considering the competition. The muscle car competition was increased even more dramatically in this year due to the introduction of the 1968 Pontiac GTO, the revised Dodge Charger and a few of the smaller companies bringing to the market, similar mid-sized muscle cars.

Ford had increased the prices as well, which didn’t help and the standard cars were now listed as the Hardtop Coupe at $2,600, the Convertible at $2,800 and much-loved Fastback at $2,700.

The 1968 Ford Mustang did not change a great deal from the 1967 Mustang. Some of these changes were made through new Government safety regulations. Here are some of the obvious additions and changes:

Included in these figures are fastbacks & notchback Mustangs came with;

Old vintage cars like the California Special was introduced in February 1968 as a limited edition to promote sales, as the name suggests in California. It is believed 4118 GT/CS Mustangs were produced with this specification. The GT/CS was only available on the Hardtop Coupes. This limited-edition model had some of the features from the Shelby GT350 and Shelby GT500 Mustang / Fastback GT.

Many people believed this high-performance Edition to be a Carroll Shelby car as the abbreviation was CS but that was not the case, although it was largely modelled on his “little red” show car hardtop. Which had a 427 supercharged engine matted to an uprated automatic gearbox. Body colour was red with a black vinyl roof.

Production of the C/C GT ended on July 30th. These cars could be ordered in any colour, engine size and if an original one found today, even if it was an unfinished project will demand extremely strong market value. Many of the 1968 Ford Mustang coupe cars have been restored to look like a CS/GT’s so make sure a full classic cars check is done before you pull the trigger on a purchase.

A few more colours were added to the chart for the Mach 1 1968 Mustangs. Colour for 1968 Ford Mustangs included:

We personally love the body styles of the Ford Mustang Shelby GT500 and the 390 GT with its big block V8 engine, dual clutch producing a top speed of 140 mph and 130 mph respectively.

1968 Ford Mustangs in the Movies 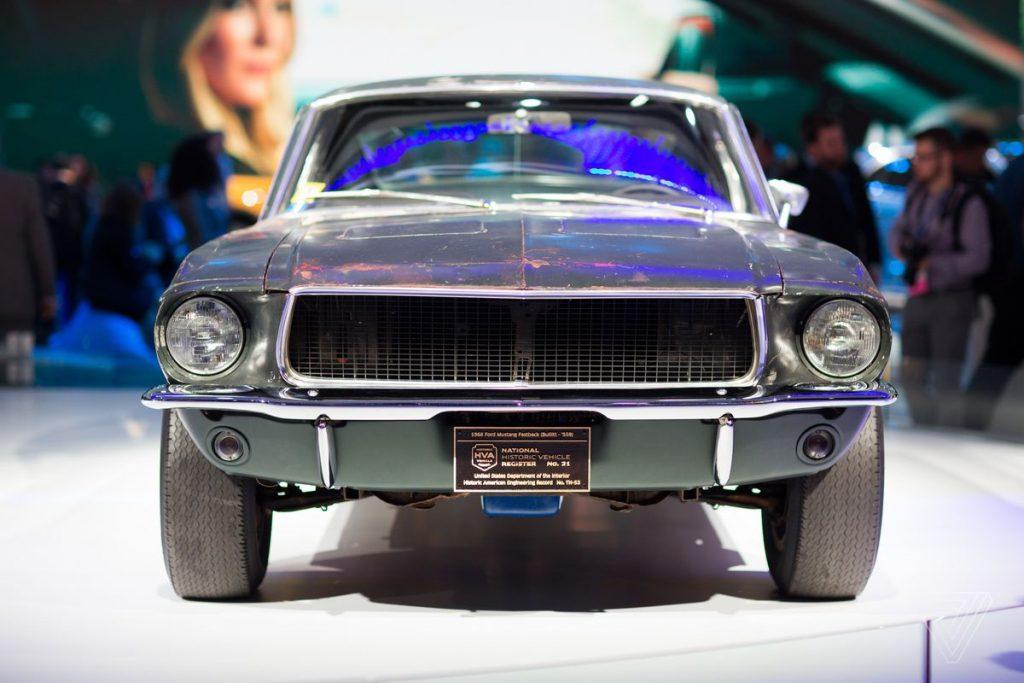 The most famous Mustang ever was a 1968 Fastback, which was used in the film “Bullitt”. The movie actor Steve McQueen played a tough San Francisco detective, he was up against the mob. Other actors in the film were Robert Duvall, Jaqueline Bisset and Robert Vaughan although the Highland Green 1968, 390 V8 uprated manual four-speed Mustang Fastback stole the show.

The film is remembered as the best car chase scene ever. McQueen in the classic Mustang chases a 1968 Dodge Charger for just over 10 minutes through the unique streets of San Francisco.

That scene helped the film win an Oscar that year for film editing. If you are a Mustang muscle car fan, then you must watch it! It is believed there were two cars used in the film, and until recently both thought to have been lost over the years.

The Legend is found!

In 2017 the jump car was found in a scrap yard in Mexico and more recently the Hero car came to light in 2018.

The car had been sold to a studio executive after filming who kept it briefly before selling it to a police detective who lived in New York. The police officer owned it for three and a half years before advertising it in “ROAD AND TRACK” magazine for $6,000 (yes I know, unbelievable). That price was high at the time but an insurance executive by the name of Robert Kiernan decided to view the car and buy it, giving it to his wife as her everyday driver!

The car was used throughout until the clutch went and Mrs Kiernan had a baby in the early eighties. The car then entered storage but not forgotten. They kept the car and its history a secret throughout the ownership.

Although Steve McQueen did hunt it down and offered to buy it in 1977. The answer was no thanks, Steve. I mean you had to have some nerve to turn down a request from the Kind of Cool!

Steve sent a letter to the Kiernans a while later, but it still wasn’t for sale. Robert Kiernan died in 2014 without having got the car running again. His son Sean Kiernan who was the baby mentioned before decided to get the car roadworthy in 2018, due to the imminent arrival of the 50th anniversary of the famous film Bullitt.

He kept as much of the originality and patina of the car as he could whilst making it fit for the road. It was unveiled to much acclaim with Steve McQueen’s granddaughter Molly attending the launch of the new 2018 Bullitt Mustang.

The car has since been showcased at many car shows around America and more recently at the Goodwood revival here on the south coast of England, United Kingdom, which is only 40 miles from our factory near Henfield.

It was amazing to attend this show and see close hand one of the most iconic muscle cars Mustangs ever produced. The late Mr Kiernan made a great investment on his $6,000 dollars as this Mustang is now valued somewhere between $3,000,000  and the $5,000,000 million US Dollar range.

This iconic Mustang obviously helped drive Ford sales, but not only in 1968 but to this very day as who wouldn’t want to be likened to the very “King of Cool” Mr Steve McQueen!

If you have an unfinished project for sale then do get in touch. If you are in the market for a GT convertible or other classic vintage cars or the later Boss 302 model, we can help you find and spec your dream car. So ditch the Land Rover or your Mercedes Benz and grab yourself a slice of muscle car history. Search our inventory here.