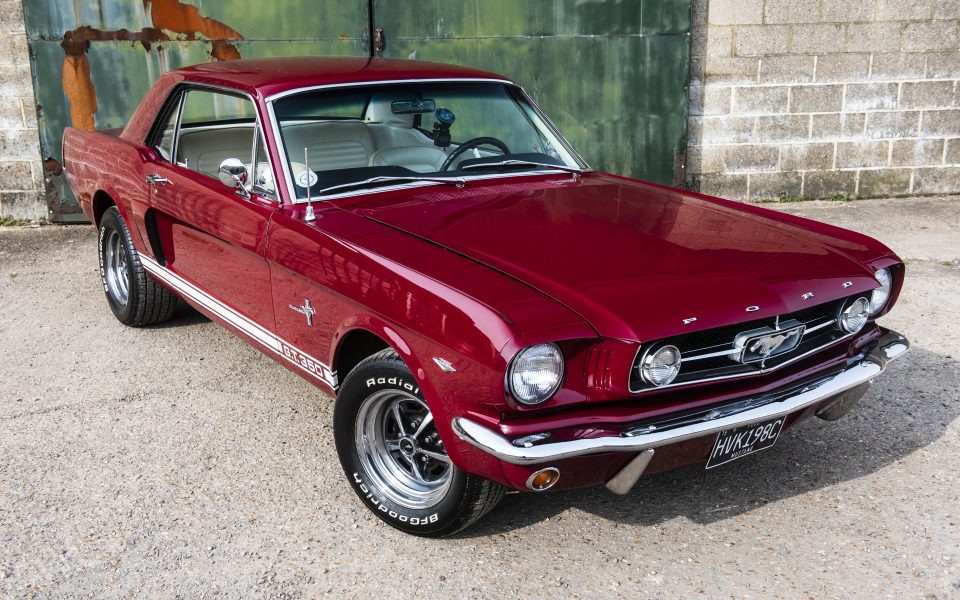 We are proudly presenting another Californian built T Code Mustang that has been reborn as a superbly specified Restomod. But unlike so many that are engineered in this way this Muscle Car not only looks incredible but it performs every bit as well as it sits on the eye, and this is what makes …

Here we have another special Mustang for the guy that wants the classic Mustang look with the addition of huge power and style.

This Mustang was born …

Possibly the best Mustang Coupe in the Country, this beautiful Mustang wants for nothing. If you are looking for something special, this is …

Chula Vista is the last City in Southern California and lies next to Tijuana just over the Mexican border. The …

The early history of the Ford Mustang has been attributed to two men, the founder of Ford Motor company Henry Ford himself and secondly Mr Lido Anthony Lacocca who was generally known as just “Lee”. Lee joined the company at the young age of 22, quickly gaining promotion through the Ford Company ranks to the point he led an esteemed team of engineers as the General Manager of Ford’s product development.

It was around this time that many major US car manufacturers had issues with the huge motors of the forties and fifties which were now obsolete. The US saw an influx of smaller European marques such as the Jaguar, Triumph, Alfa Romeo and Porsche whose smaller sports cars were hard to compete against. Ford had to find designs and American cars for sale that would match and overcome the European sports car invasion.

After a considerable search, a muscle car design by Gale Halderman was found and the Ford Mustang project was born and registered as a trademark. This classic car design evolved over several years and several designers including Joe Oros, David Ash and John Foster. It was decided that a four-seater sports car with a large bonnet, which could house several engine sizes and a small rear end would give the impression of a big engine compact sports car.

Much deliberation on certain aspects of this new car took considerable time but eventually, on the 9th of March 1964, the first Ford Mustang rolled off the assembly line. It was shown to the public at the New York’s World’s Fair and released for sale on the same day April 17th, 1964.

That weekend has gone down in American automobile history as over that first weekend, throughout the United States 22,000 thousand orders were made. The Ford Mustang was an instant success with what at the time was a reasonable list price of $2,368 it was a sure-fire winner with the baby boomers.

It is generally thought that an original 1964 ½ Mustang pony car is considered the “Holy Grail” of all Mustangs built and available in the marketplace. In its true original release condition, the car can fetch a substantial amount of money, well into the hundreds of thousands of dollars. This is certainly true in many cases and recently “Survivor” original cars are proving to be worth more money than perfectly restored examples. But buyer beware when investing that level of money due diligence is essential.

In those early models, there were many differences between 1964 and 1965. Here are just a few to note;

I’m sure there are several other features that I haven’t noted above which would determine a true 1964 ½ Mustang and every one of those features would be needed to be present in order to achieve the “Holy Grail” market value.

It’s important to note that many cars are advertised as 1964 ½ cars but over the last 54 years they have lost many of their original parts and therefore can not command the huge money being demanded by some dealers and private owners. So again, buyer beware.

The Ford Mustang introduced the hardtop “Coupe” version and the convertible on April 17th, 1964 and the fastback went on sale in August of the same year. Those three body styles were maintained for several years. The total number of cars produced pre-August 1964 which are called the 64 ½ is believed to be 121,538 which consists of 92,705 ford mustang coupes and 28,883 Convertibles.

There is also evidence that maybe 200 cars were also built for advertising, crash testing, engineering purposes, sales literature, and promotion. Many are believed to have been destroyed or used for racing, these were called the pilot and pre-production Mustangs with some featured roll bars and a fibreglass hood.

In 1964 there were several engine choices;

The Mustang colour chart for the 1964 model included:

The interior had the new “wall to wall” carpeting feature with sports front bucket seats or an option of a front bench seat. Advertised also with a full headliner and a sports car steering wheel!

Many of the model year 1964 ½ had full wheel covers (hubcaps), disc brakes and the front grille had the chrome Mustang Horse sign surrounded by a chrome oblong called a “Corral” and a chrome bar either side lately called “Wings”.

It wasn’t long before the car was being marketed everywhere and one of the most famous introductions to the Ford Mustang was in the placement of a convertible in the famous 1964 James Bond Film “Goldfinger”.

The car was used in a chase scene, James Bond (Sean Connery) drove his Aston Martin DB5 while chasing Tilly Masterson in a white 64 ½ Mustang convertible through the Furka pass in Switzerland. Bond’s knock of centre caps popped out which then became spinning blades, which slashed the Mustangs tyres and munched through the bodywork ending in the Mustang coming to an abrupt halt. The Mustang is on British plates but still left-hand drive.

American original adverts and commercials can be seen as well as the Bond clips through YouTube. They are certainly fun and of interest and worth browsing through. The motor trend market for these early Mustangs is gathering pace as being over 54 years old, solid original cars are becoming scarce in the states. We have seen some original 64 ½ making serious money mainly by investors who are entering the market.

I would respectfully advise the reader that I have tried to summarise the production of one of the world’s most famous cars here as an insight into the production and specifications of these cars. There have been many books written about the early Mustangs which would give a buyer a great deal more information and detail than here. It’s clear that if you do come across a true Holy Grail Mustang it would be one hell of a good investment.

Ford really knew they were on to a winner as the 64 ½ or early ’65s had beat all expectations. They had decided to build a car for all the family, it could be a “grocery getter” or a full-blooded racer. These clever guys at Ford had designed so many option packages that every personal preference in driving could be achieved.

As the Ford Mustang 1965 normal model year starts in the states in August any car built after August ’64 is known as a late ’65. I know it’s all a bit confusing! One of the first things to change was the engine packages, the smaller engine was upgraded to the 200cu, 3300cc T code which produced 120hp. The now rare 260 F code engine was replaced by the 289 200 hp C code (two barrel carb) or the same engine but with (four barrel carb) an A code engine producing 225hp.

The 1965 option list was extensive and many of the higher range cars had many of these features as standard, but here are a few noteworthy special edition options and upgrade prices from 1965.

Little did they know how important these extras would become in today’s market.

A few more colours were added for the Bodies in 1965 they included;

The interiors colours were also added to in many different types of vinyl to match these new body colours. Many combinations were possible also with the “Pony interior” seating which had Mustangs galloping in embossed vinyl along the front top of the front and rear seats.

The production figures for the late 1965’s was a staggering 559,451. This huge figure was broken up across the three models.

The retail price for the standard package models was as follows;

Of course, once the Ford salesman had finished selling you as many options as possible the figures would normally increase significantly. This process is still used throughout the Motor Trade today when buying a new car.

Ford had been working with the Famous Carroll Shelby since the early sixties supplying the engines for the iconic AC Cobra, Daytona and the legendary Ford GT40 which between them had won countless races across the USA and Europe like Le Mans. Lee Lacocca in 1964 went to Shelby and asked whether he would make a Mustang race car. Mr Shelby’s reply was.

“Lee you can’t make a racehorse out of a mule. I don’t want to do it” Carroll Shelby

Lee replied, “I didn’t ask you to make it, you work for me.” As you can imagine Ford had been a very strong business partner for Shelby so obviously a compromise was made. The 1965 Ford Mustang Shelby GT350 was born soon after and the Shelby name would be linked with Mustang history forever.

The Shelby American GT350 was based on a 1965 Ford Mustang Fastback which was delivered to the Shelby factory stripped down making it the smallest and lighter. Shelby put the K code Hi-Po V8 engine in the car with a huge four-barrel carburettor producing 306 brake horsepower. Brakes were upgraded to bigger hubs on the back and discs on the front. Higher manifolds with Cobra decals and different exhausts were also fitted. These were built as a performance sports car. Shelby also made 34, GT350 R’s for his Ford racing team which a great success in the SCCA B Production class.

The GT350 R won this championship for several years, which undoubtedly helped the sale of the 1965 Mustang GT350. So, although Carroll Shelby didn’t want to make a race car, he made a pretty good job of it after all. They were mostly painted in Wimbledon White with guardsman blue rocker stripes, most replicas of these cars even today are painted in the same colour scheme.

This original racing GTR’s are now valued at well over $1,000,000 depending on race history today. Shelby wasn’t finished yet and in 1967 the Shelby GT500 was born.

After the success of the product placement of the Mustang in the James Bond Classic “Goldfinger”. Ford once again managed to get a 1965 Ford Mustang Convertible in the next film “Thunderball”.

This time the all American muscle convertible was Caribbean Turquoise in colour with a white top. Fiona Volpe drives this Mustang in the Bahamas, she picks up Bond on a quiet country road and takes him back to Nassau driving high speed.

Bond notices that she is wearing a Spectre ring during the ride and the car can be seen at Largo’s estate again which links Fiona to the baddy Largo.