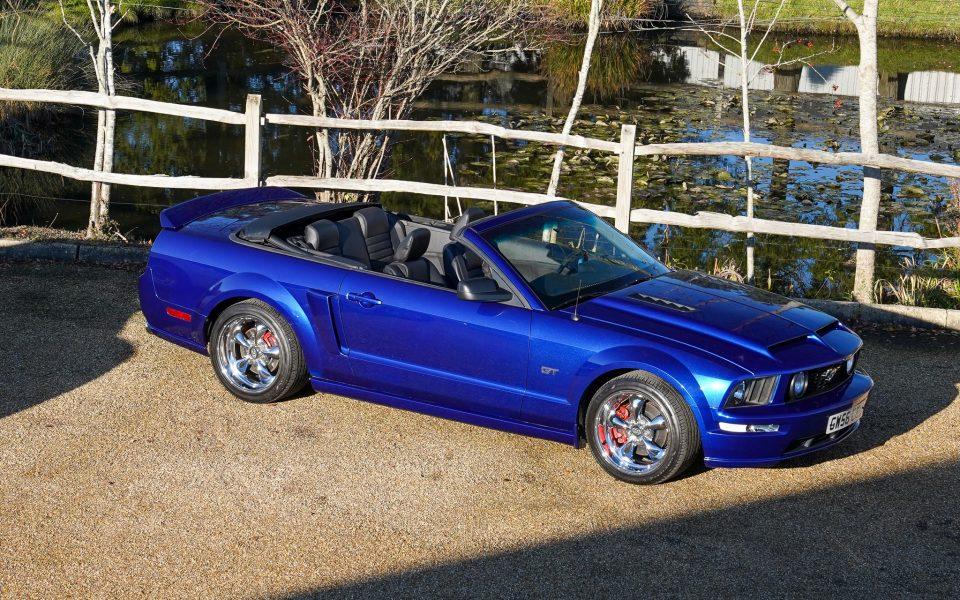 Supercharged GT Mustang Convertible! A very rare beast. This Mustang was registered in 2007 in the USA and in 2017 it was built to the following specification before it arrived here in 2018.

The worlds best-selling sports car over the last three years!

At last, in 2015 a right-hand drive version landed on our shores from the US. The new Mustang had made its debut in 2014 at the Detroit motor show where it was announced that Ford had developed this model under their “One Ford” plan.

It was there objective as the programme boss Dave Pericak said,

“We decided to take the Mustang global, we didn’t change the recipe”.

The earlier model had also been a great success and they started their development by looking at that Mustang, but as he stated. “The only commonality is the wheelbase, every sheet metal panel is different and only two fasteners are retained.”

Ford marketing department, who over the years had shown their worth, came up with another superb idea, that during the 2014 UEFA European Championship Final between the two teams from Madrid, Real and Atletico. They would offer 500 Mustangs over 20 European countries for sale as a special promotion, this included 130 right-hand drive cars for the UK market. Amazingly they totally sold out in 30 seconds (that’s ridiculous) and a further 9,900 were left rather disappointed! If there was any doubt about the popularity of the Mustang in Europe, there wasn’t any now.

In the first few months of 2015 over 1800 orders were taken and as Ford’s UK Boss Andy Barratt said,

“We are now sold out beyond next July”.

Yet again Ford Mustang UK sales had smashed it and their competition! All the right-hand drive Mustangs were built at Fords Plant in Flat Rock Michigan, and they couldn’t make them fast enough, which was reminiscent of the 1965 production issue.

In 2018 the 10,000,000 millionth Mustang left the factory, it was a Wimbledon White GT V8 Convertible. This is some feet as a Mustang is not a necessity car purchase, like the bigger selling Toyota Corolla, for example, it is a purchase which is led by emotion and desire, you just decide you want one, it’s part madness, part addiction!

This Mustang had to be something special as it was the fiftieth anniversary of the original Mustang. The Ford development of this Mustang had to show the essence of the historical muscle car within its new modern body shell and its hidden technology. As we all know, this iconic car smashed all records when it was released in 1964/1965 and Ford’s idea was to supply this new Mustang on a global scale. It’s now become a viable proposition that new car guys and gals can have a real slice of Americana in their own garage.

Mustangs have been available throughout the ‘70s, ‘80s, ‘90s and 2000s but Ford had never really pushed the sales outside of the States. Although many determined buyers found their way to owning one from shipping them across the pond.

The all-new modern Mustang went down very well in right-hand drive format with the Mustang being available for purchase in two body styles, the Fastback and the Convertible. Over 7,000 new Mustangs have already been sold in the UK since its introduction in 2016.

This modern Mustang had been totally redesigned throughout. At last, a new rear independent suspension was fitted and an upgraded front suspension made it more suitable for the UK and European tight and winder roads. Two engine sizes are also available the Eco-Boost Turbo Charged four-cylinder engine and the larger, V8 power plant. Ford says that that 70% of the buyers have chosen the V8 engine, boasting a 410bhp output, this engine was upgraded to 500bhp in 2017. Automatic and manual were also an option and Ford confirmed the six-speed manual was preferred.

Ford maintained its winning ways with interior and exterior upgrades. Some features hark back again to the sixties within the new cockpit, the twin hooded dash returns and the gauges in the circular deep ports nod to its historical past. The original dash set up can be seen on one of our classic Mustangs. All reviews suggest that the driver will enjoy the overall experience of the new cabin additions and technology. The body shell has an unmistaken meaner look and stance. The rear angle of the broader wheel arches and the modern tri-bar L.E.D. rear angled lights make the car very imposing from the back and the front speaks for itself!

Many new cars nowadays all look the same but in our humble opinion, you can never mistake the Mustang for anything else on the road. The outside sound system “the exhaust” note, is exhilarating, to say the least. You will certainly let everyone know you are driving a Mustang. We also fit upgraded exhaust packages if you really want to be noticed.

There are many special editions which enhance some of the standard Mustangs, made by some of the serious names in the aftermarket performance upgrading business. These include; the Roush RS Model, Saleen S302 Model, Shelby American GT, Warrior Edition from Roush, Shelby GT350, GT350R and the GT550 is due in 2020.

In 2019 to celebrate the 50th anniversary of the film Bullitt which starred Steve McQueen and his unforgettable 1968 GT350 Mustang Fastback. This film possibly featured the best car chase sequence in film history and helped the Mustang to become as legendary as Mr McQueen himself. McQueen plays a tough San Francisco cop who chases down the baddies in their Dodge Charger through the streets of San Fran. A must watch if you haven’t seen it.

In honour of this iconic car, Ford released a limited edition Bullitt Mustang Fastback for 2019, this only came in the six-speed manual with an upgraded V8 engine. Only two colours were made available, the iconic Highland Green as in the movie and my favourite in Shadow Black.

Bullitt decals inside and on the exterior make this car easily recognisable. It was also fitted with 19-inch black spoked wheels with six-piston Brembo brakes, Recaro seats, green trimming around the cabin and a cue ball gear knob. Ford had allocated 350 Bullitt special editions for the UK market but what a surprise, they have all been sold but if you put a deposit down you may get one in 2020 – if you are lucky!

Here are the production figures for Modern Mustangs

One in three Mustangs built are exported outside the US to over 146 different countries worldwide. China was one of their strongest markets along with Europe. Mustang outsold Porsche in its class in recent years in Germany. Ford is promoting more regions over the next few years, so hopefully, they will maintain their place as the best selling sports saloon in the world.

We are looking after several clients Modern Mustangs, with their servicing and upgrade requirements. We have now become an official Steeda Approved Dealer for Mustang and have fitted our first demonstrator with a Steeda suspension and brake upgrade along with Velgen wheel and tyre package. Also, for good measure a Whipple supercharger, which gives us over 700bhp. As you can imagine, this is not for the faint-hearted! We have four specialist Mustang mechanics who not only work on the classic Mustangs but have also a great deal of experience in the Modern Mustang world.

It seems that the iconic Ford Mustang is still going from strength to strength. What makes this car so popular? Well to own a Mustang once in a lifetime is something very special and here at Muscle Car UK & Pilgrim Motorsports, we are privileged to work on and sell all of the Mustang models throughout the years from its release in 1964.