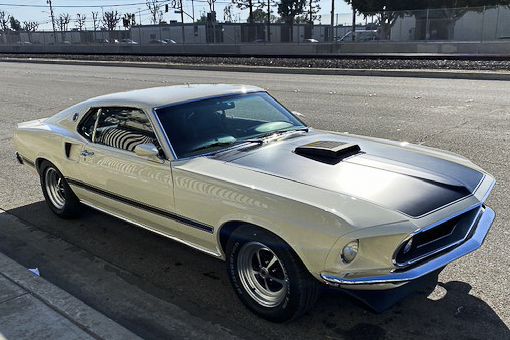 We are delighted to offer this beautifully restored example of what many consider to be the greatest of all the Classic Mustangs.

This Cobra Jet has been the subject of …

About the 1969 Ford Mustang

In 1969 America had just put their astronaut Neil Armstrong on the Moon! Richard Nixon was president, the British band The Who had just released “Tommy”, and The Beetles were at the top of the charts pretty much worldwide with “Get back”.

The late sixties was time for Ford to be bold and brassy, all the manufacturers were trying to produce the most powerful muscle car, the race to the moon between the Russians was one, now it was the turn of the car manufactories to take their challenge to the next level.

Ford’s Mustang pony car was still top of the tree, but Ford decided to introduce an overall larger car with a more of an aggressive look to (the larger dimensions are shown below). New more powerful models arrived on the scene including the Mach 1, Boss 302 and Boss 429. These Mustangs went well with the Shelby GT350 and the Shely GT500 that had sold so well in previous years.

The wheelbase remained the same as did leg room but the boot capacity increased from 9.3 cubic feet to 9.8 cubic feet.

As can be seen above with the increased length and width allowed for even bigger engines to be used.

There were a few obvious differences between the 1968 and 1969 models. Here is a list of the differences (without getting too technical).

Please note that there are many other differences between the model years, but I have only described the obvious tell-tale signs. So that it’s easier to recognise which Mustang was produced in which year.

With the increased length and width, this allowed for even bigger engines to be used, here’s a list of that 1969 Ford Mustang engines and their respective engine codes.

The gearboxes were the same as the previous years, three or four-speed manual transmission and the “Cruise -O-Matic” automatic gearbox was still in use.

For some unexplained reason Ford renamed the Fastback as the “Sports Roof” the new name lasted to 1973 mmm not quite as cool a name as the Fastback name.

This package was all about speed and performance. It was only available on the sports roof (fastback) model.

As Ford already had experience in the marketing of upgrades over the years and the Mach 1 allowed the Ford customers to pick from six different engine types, sixteen different exterior Mustang colours, three interior colours and five transmission options. Thus, this left the Ford fans in the driving seat to choose exactly what they wanted before their Mach 1 rolled out of the sales floor showroom.

The Mach 1 was such a success they sold 72,458 cars in 1969 alone, which was made even more special as Ford had also released six special edition Mustangs in the same year. These included the Boss 302 and Boss 429.

Due to the huge success of the Mach 1, the GT versions were discontinued later in the year and the Mach 1 went on to the next decade, 1970 onwards.

The John Wick chapter, played by Keanu Reeves, drives a 1969 Ford Mustang Boss 429 in the 2014 Movie named “John Wick” which also featured actor Ian McShane. In the movie, filmed in New York City and made by Director Chad Stahelski. The car that was described as a Boss 429 was unlikely to be an original, considering they are one, extremely valuable and two, in short supply with only 869 sold during ‘69. As this car is part of the plot then we will go along with that, but to most ardent Mustang fans agree that it is more likely to be an automatic Mach 1 with, shall we say “additions”, that was used during the filming.

There were five cars in total used in the making of the film, but it is believed they were all destroyed during the action scenes, which is a great shame, bearing in mind what the original “Bullitt“ car is now worth a cool $3 to $5 million (2018). Keanu went on to feature in John Wick 2 and John Wick 3 Parabellum is in film production now. He also had previous encounters with the Mach 1 in the classic film “point break” in 1991 with Patrick Swayze.

The 1969 Ford Mustang Fastback has become an iconic classic aimed at, dare I say it, a younger generation, but clearly shows that a Ford Mustang of over 50 years old is still loved by every age group, the body style, look and feel is timeless that’s for sure. It’s been used in so many films, TV series and even in the massive hit video game GTA.

In 1969 the Shelby American Mustangs were all made in-house by Ford. The Shelby GT500 Cobra Jet were quite different specs to the other Mustangs in their range with fibreglass bonnets and a combination loop, off bumper and grille. They were still produced as the GT350 and the GT500 in Fastback and GT Convertible models, both with the same specification. Sales dropped off during ‘69 until production was finally stopped at the end of the same year, although some were later registered in 1970. These days you can get a stripe kit on some old cars for sale.

In modern times, Ford celebrated Shelby with the GT500 KR, KR meaning King of the road, and how could we disagree! Modern upgrades you can get for classic cars like Mustangs include power steering, air conditioning, improved disc brakes and changes between manual and automatic transmission.