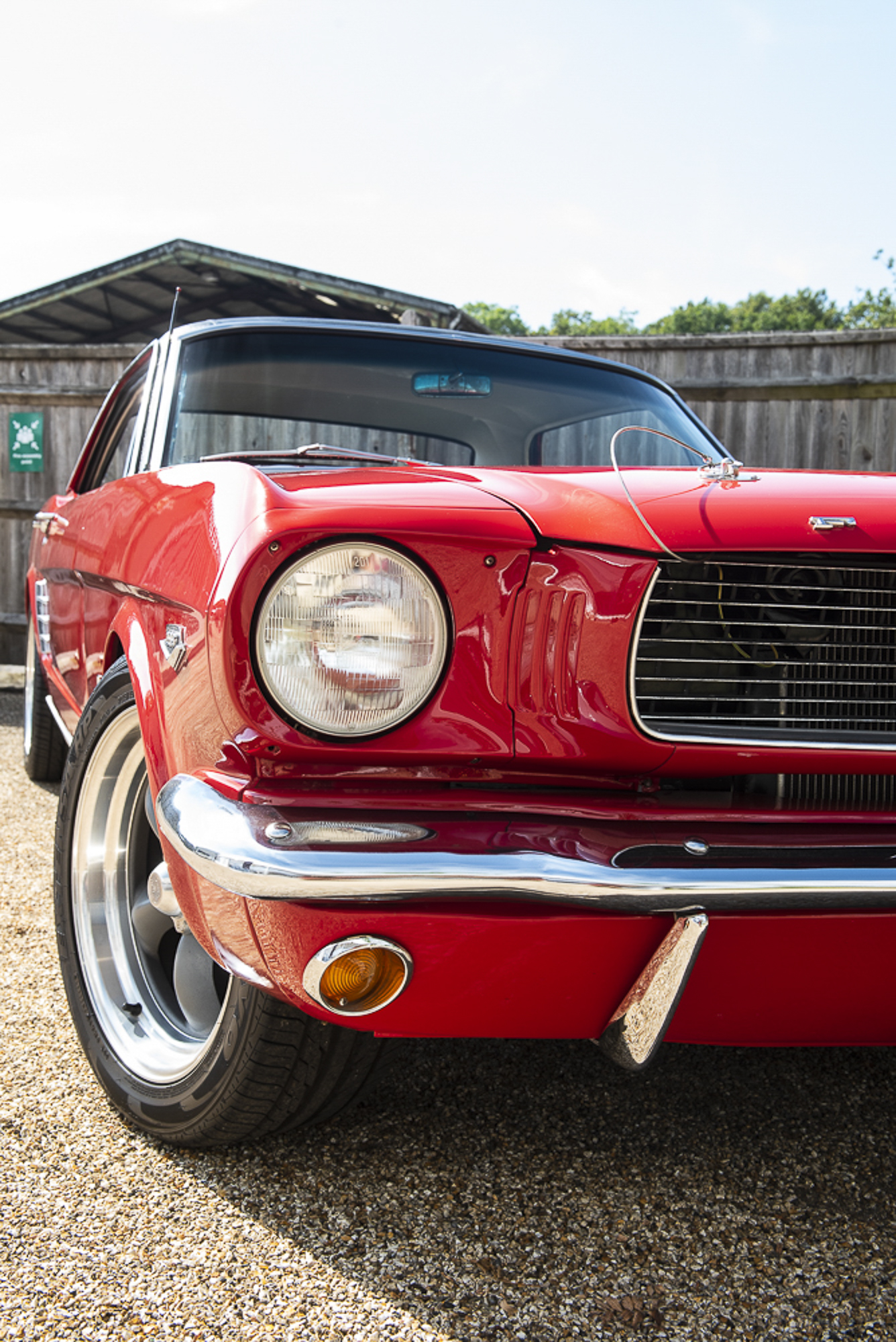 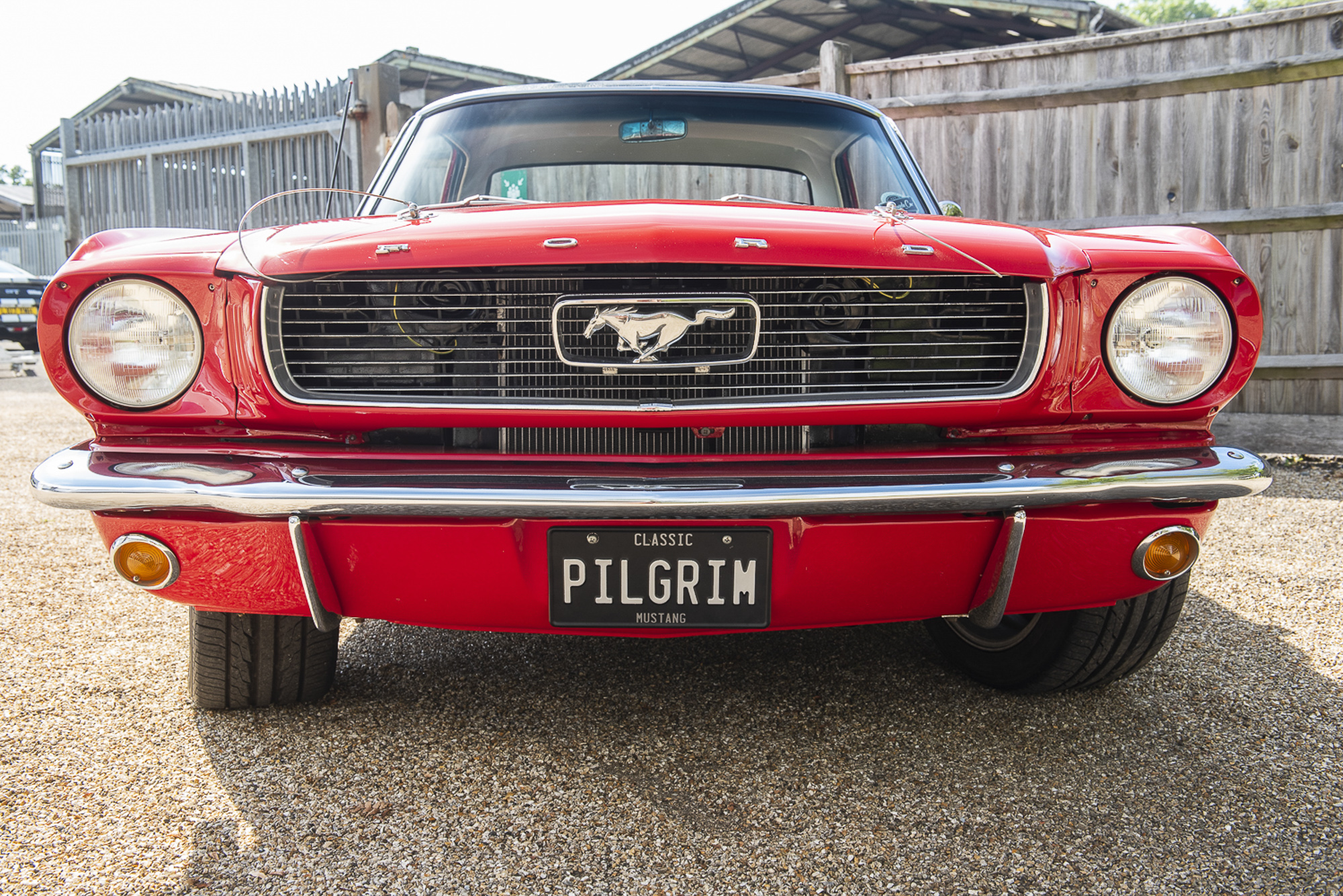 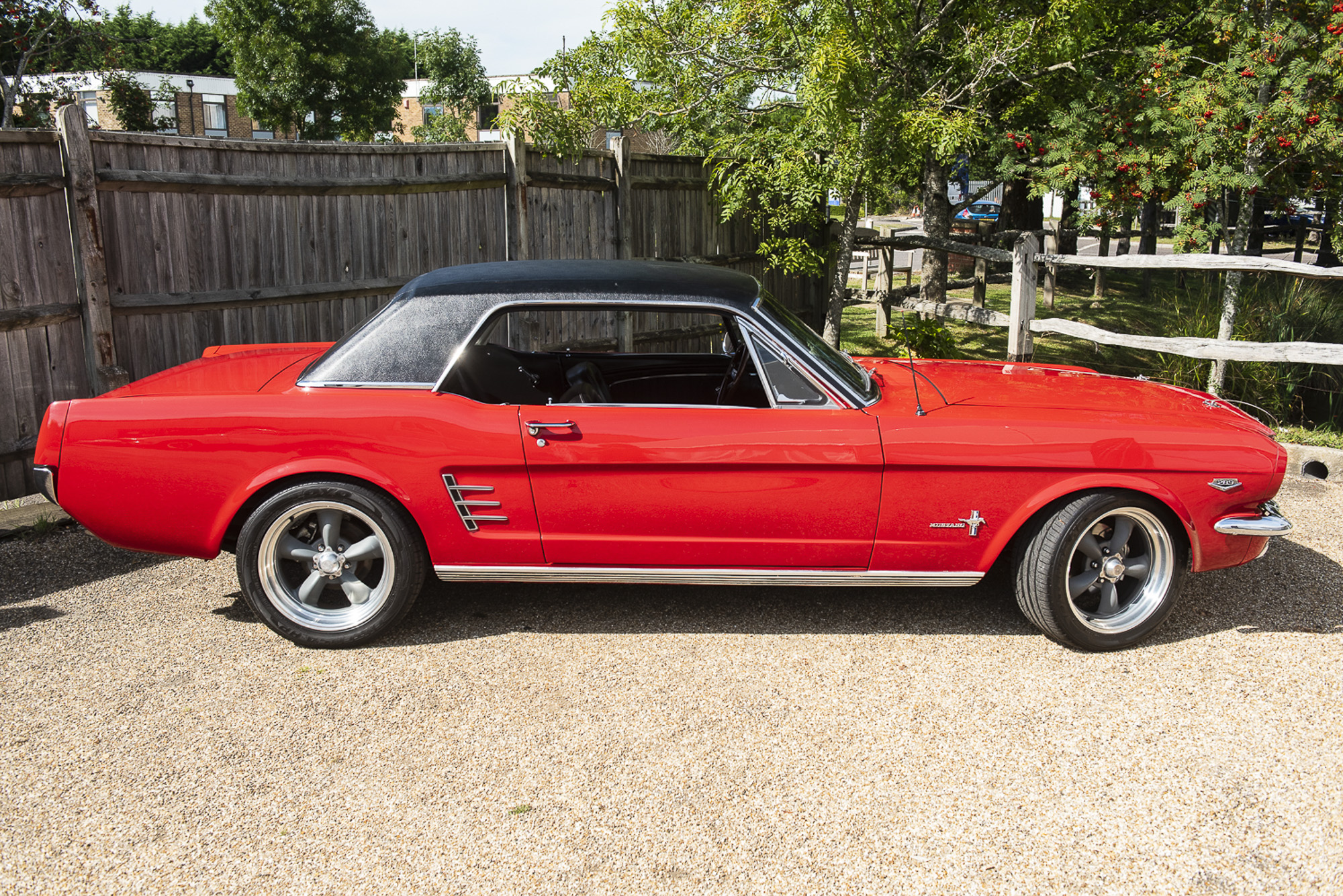 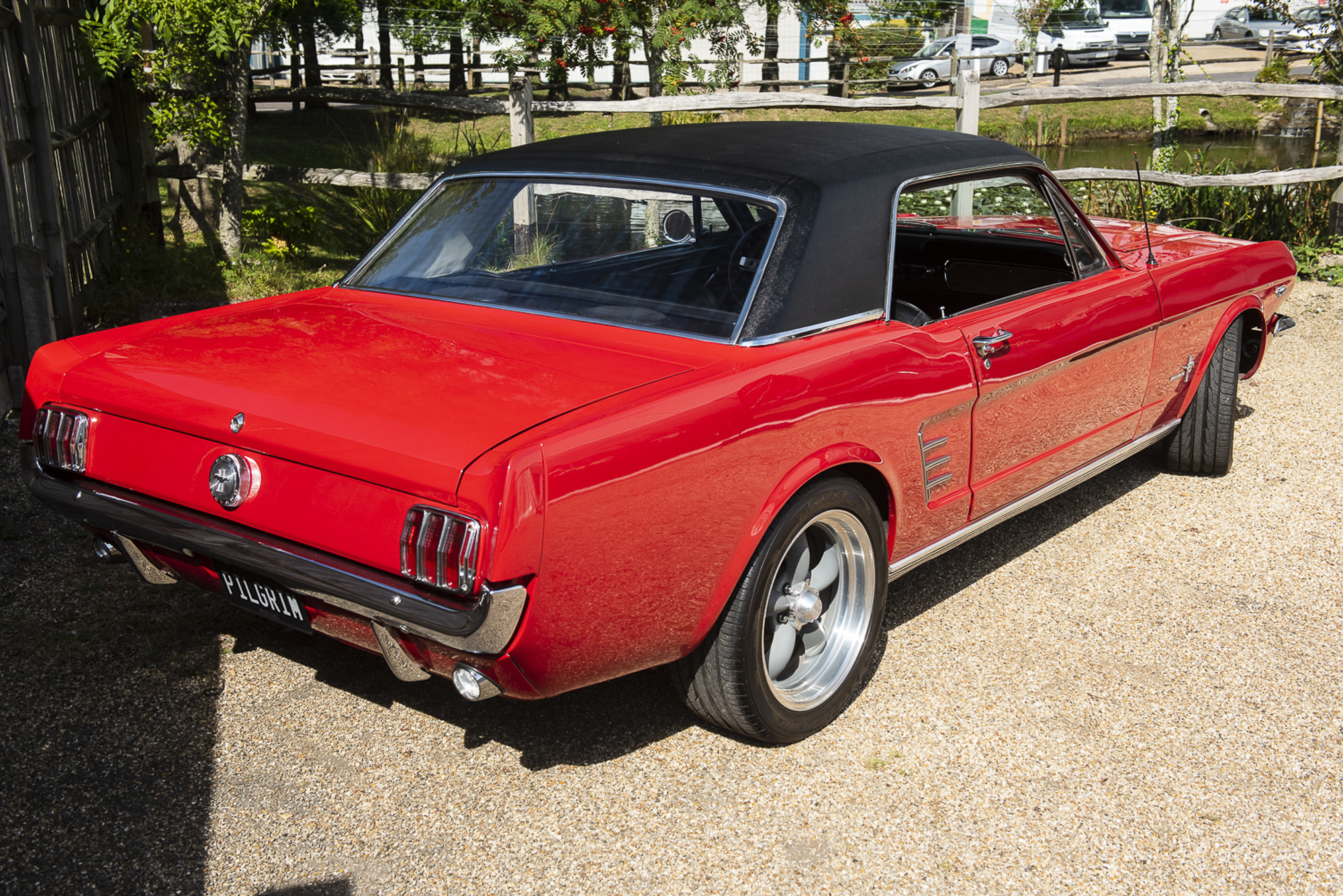 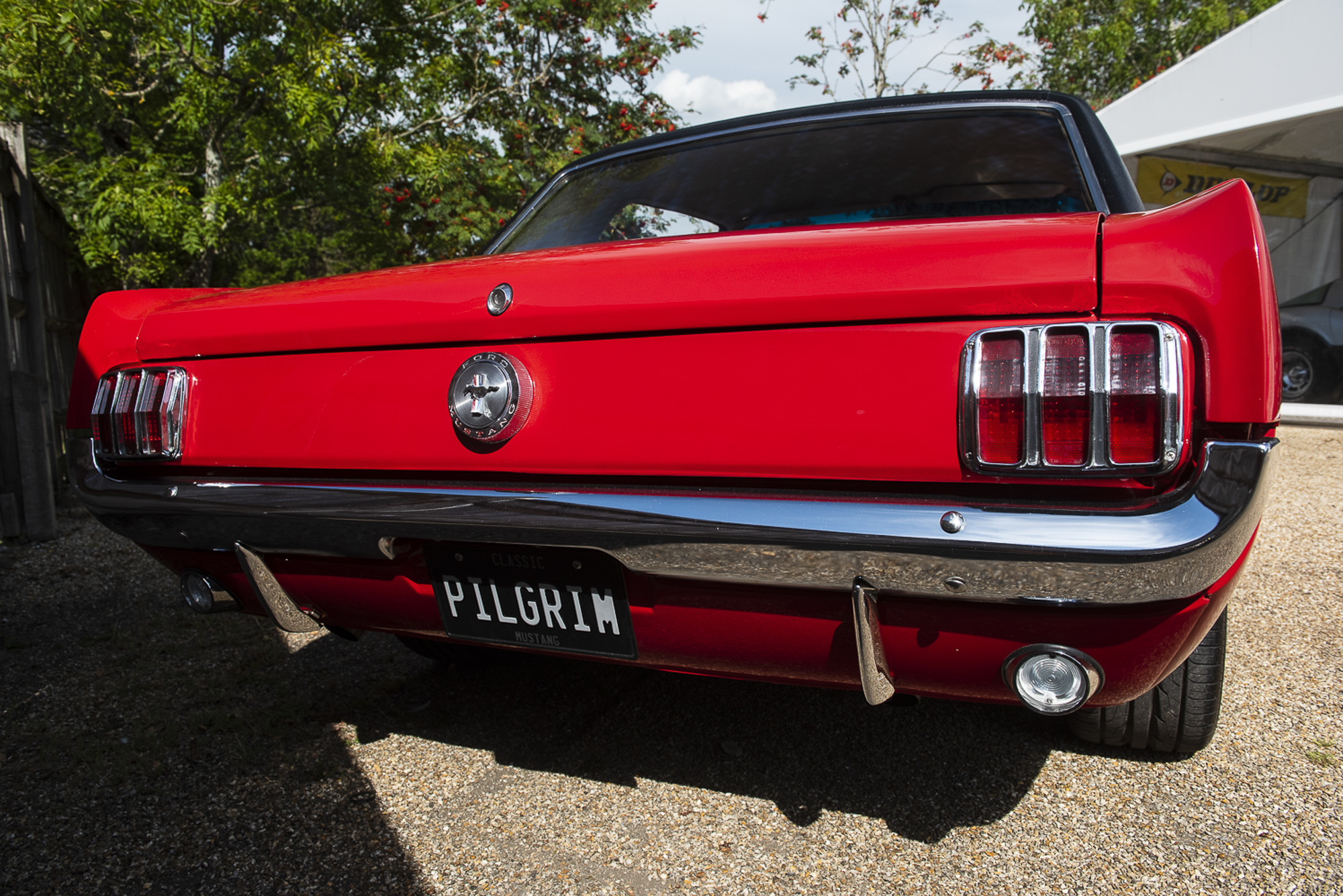 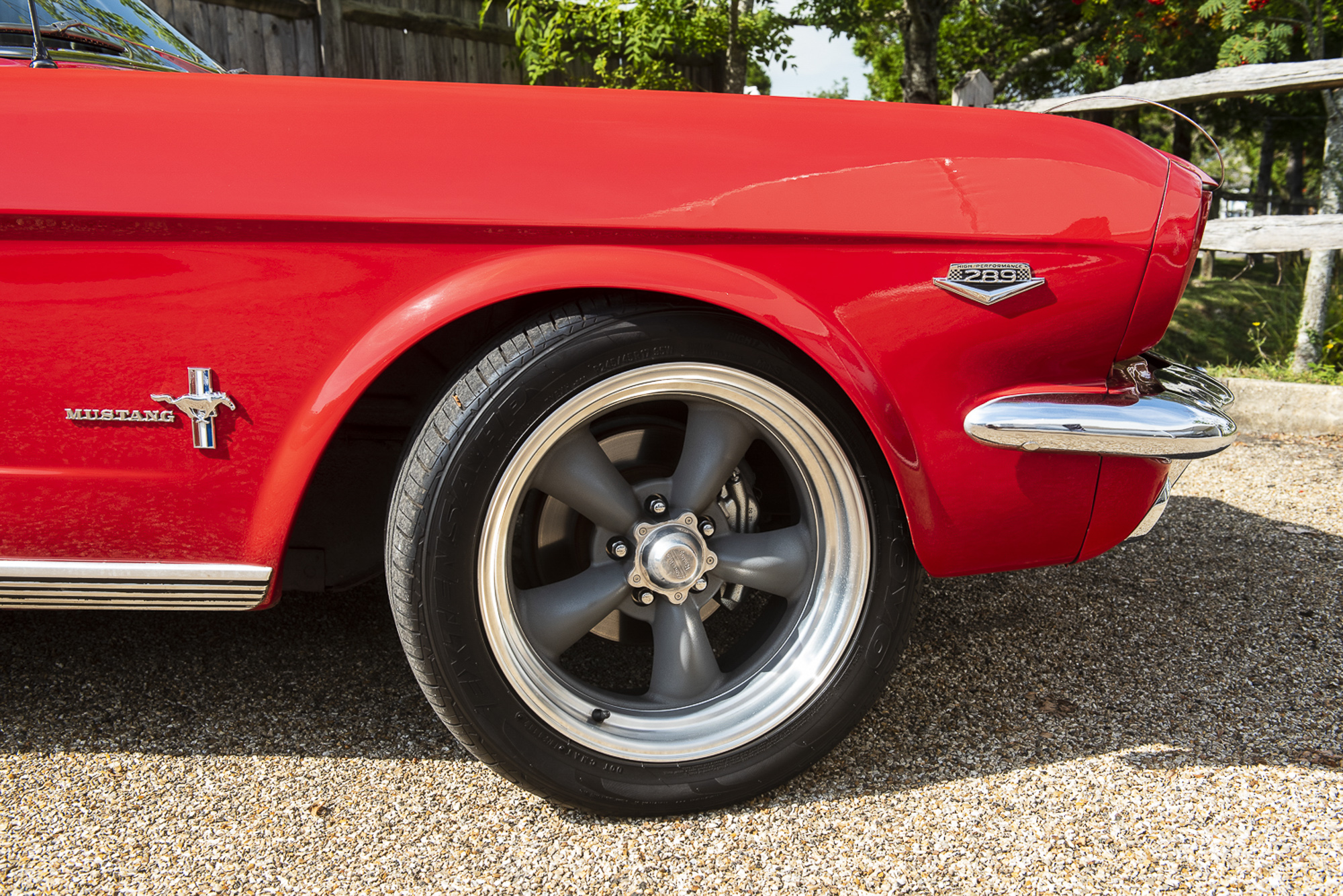 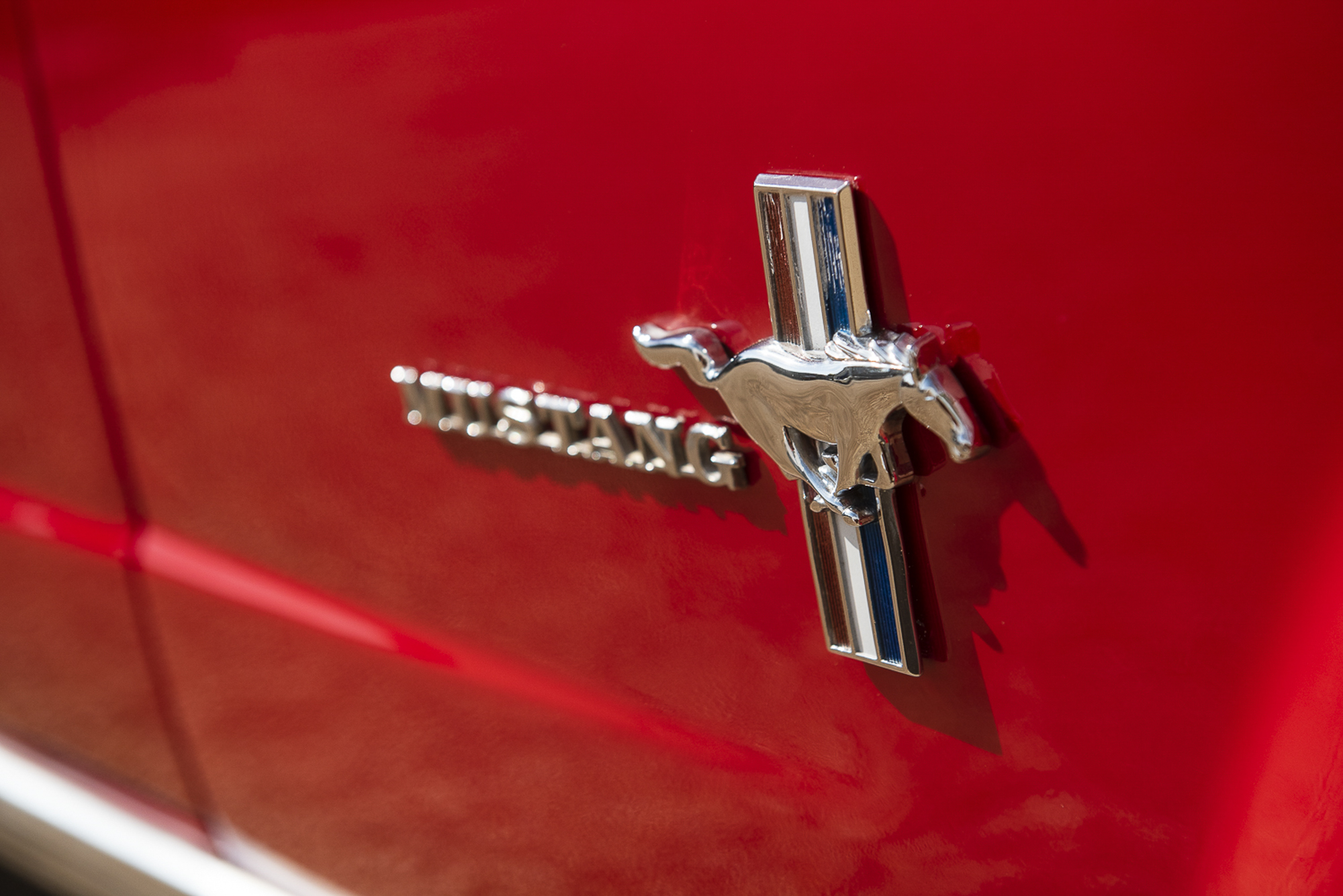 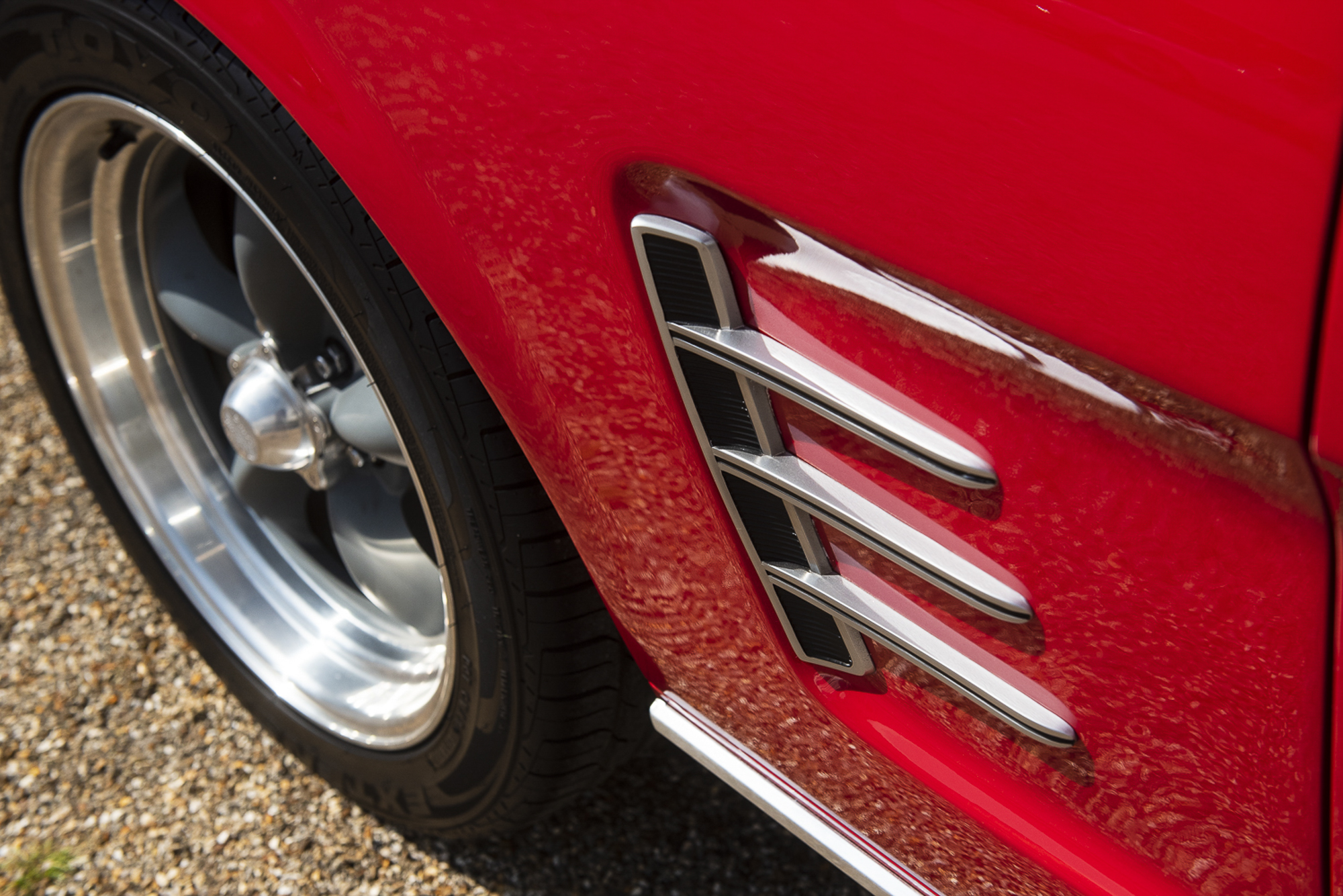 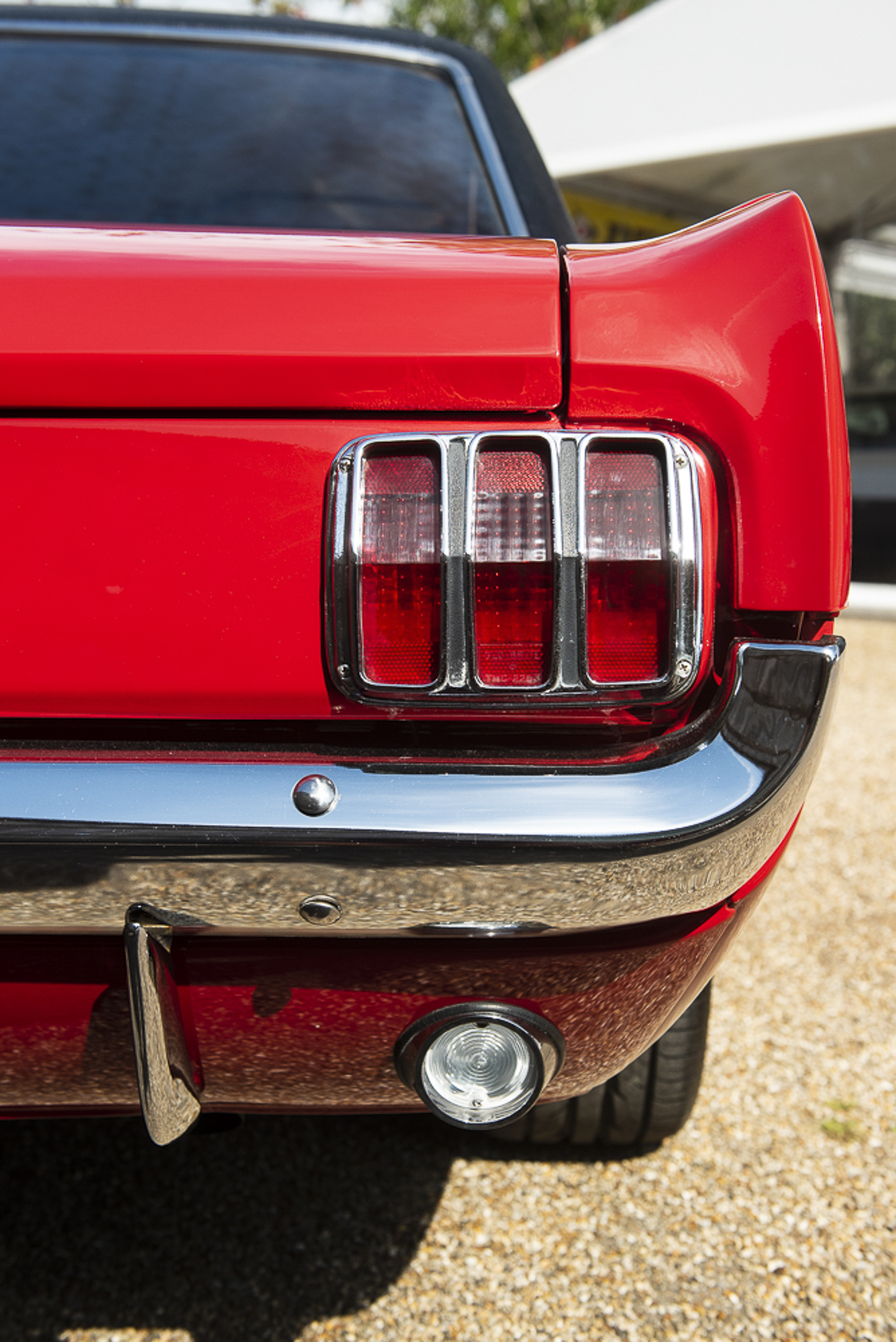 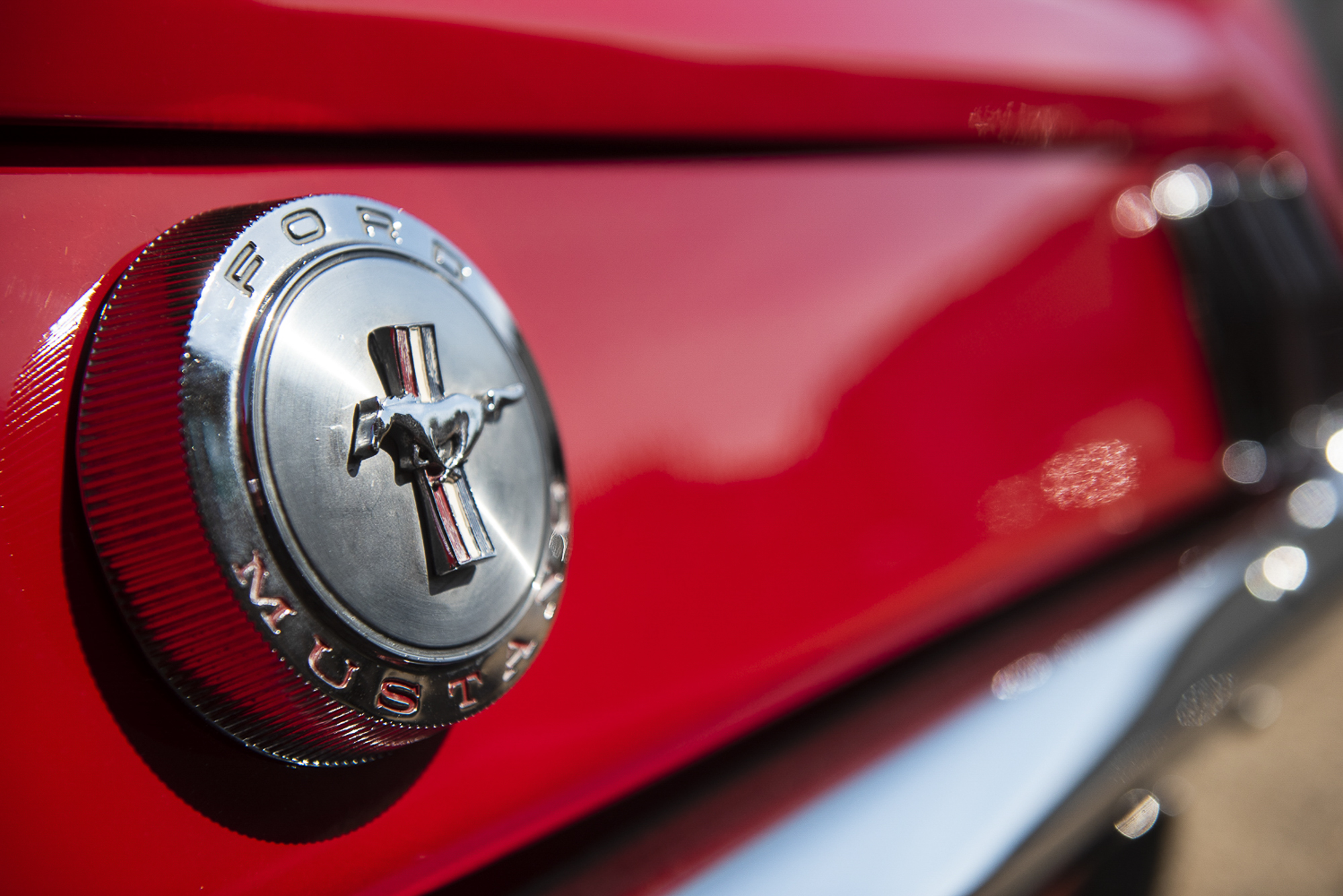 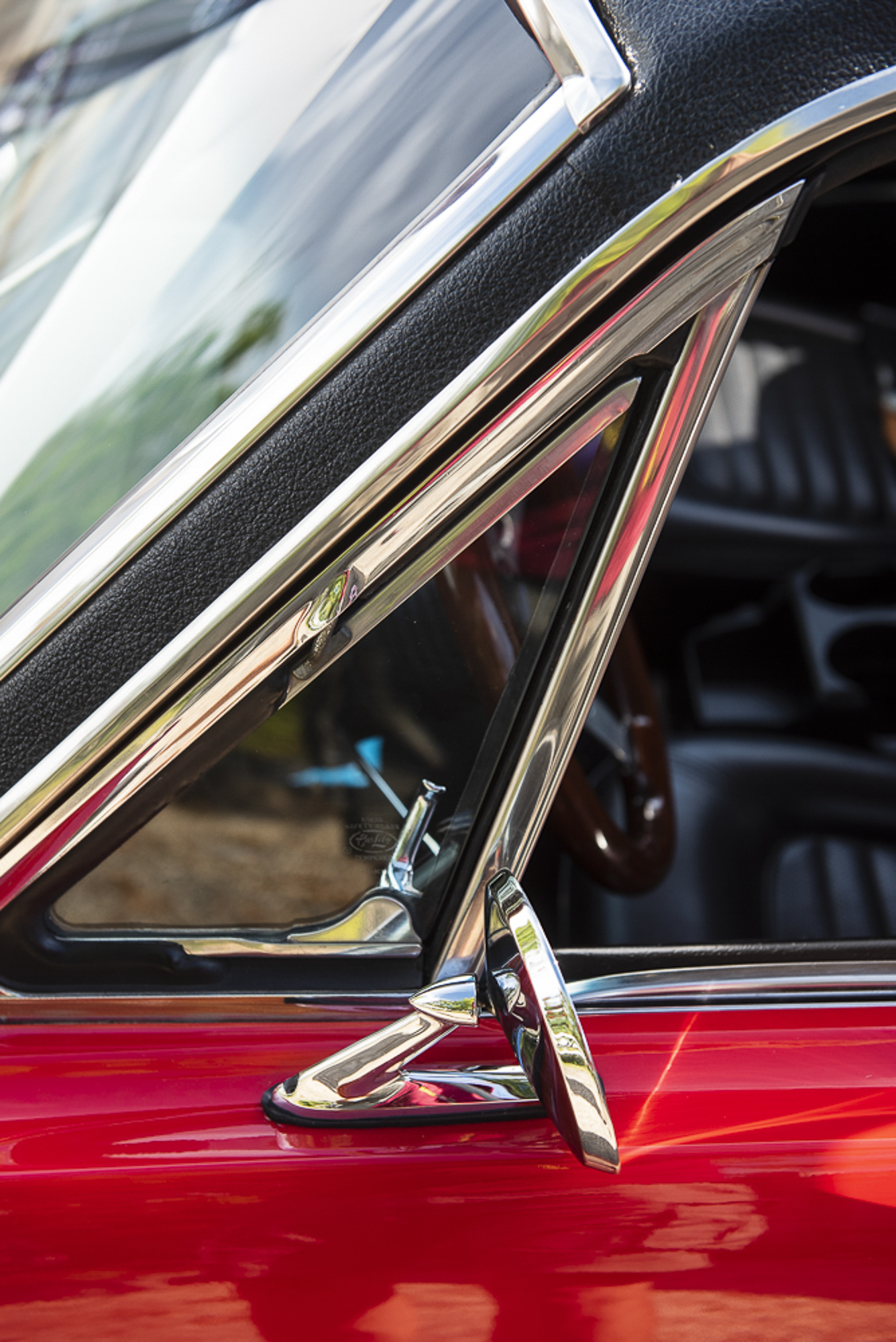 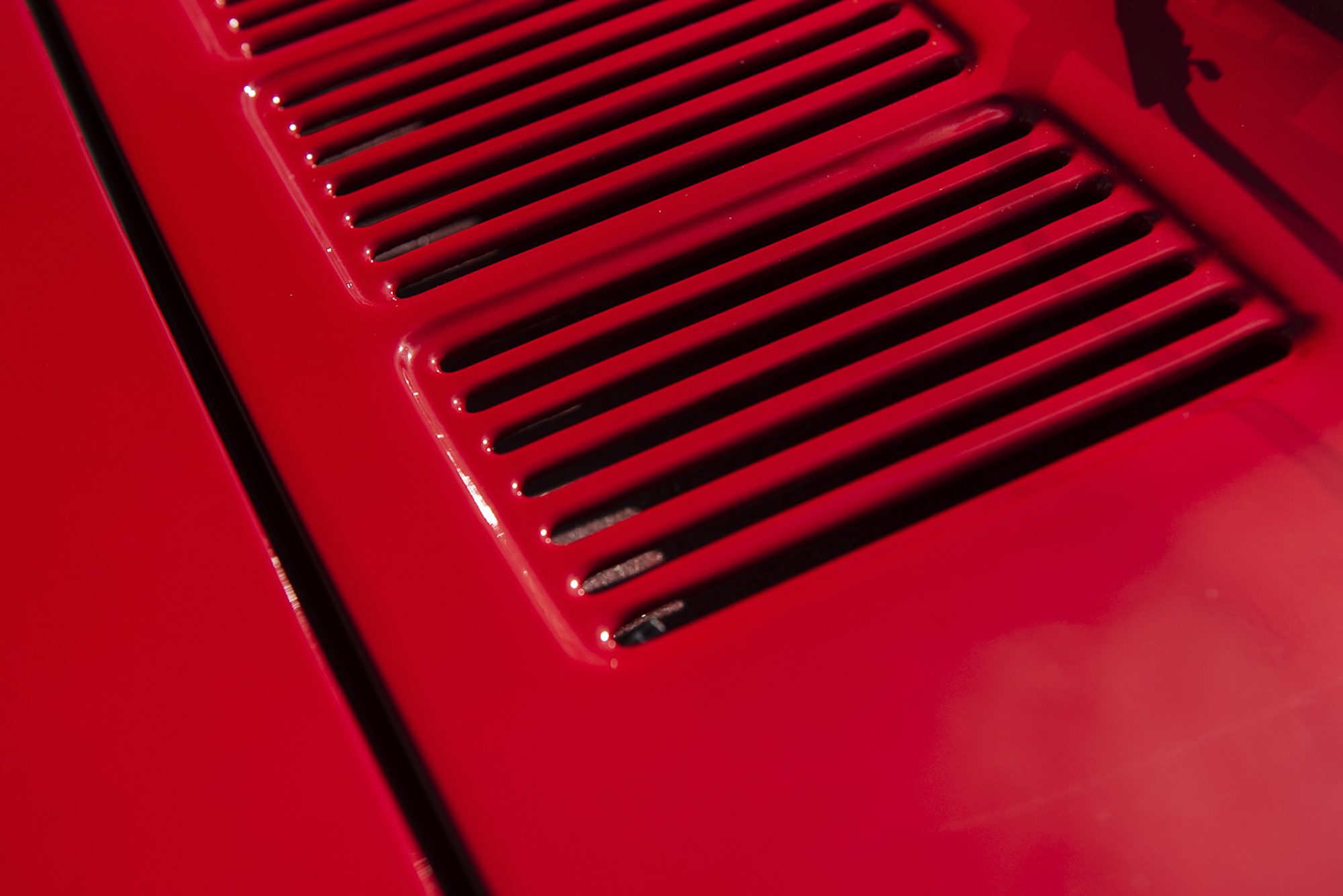 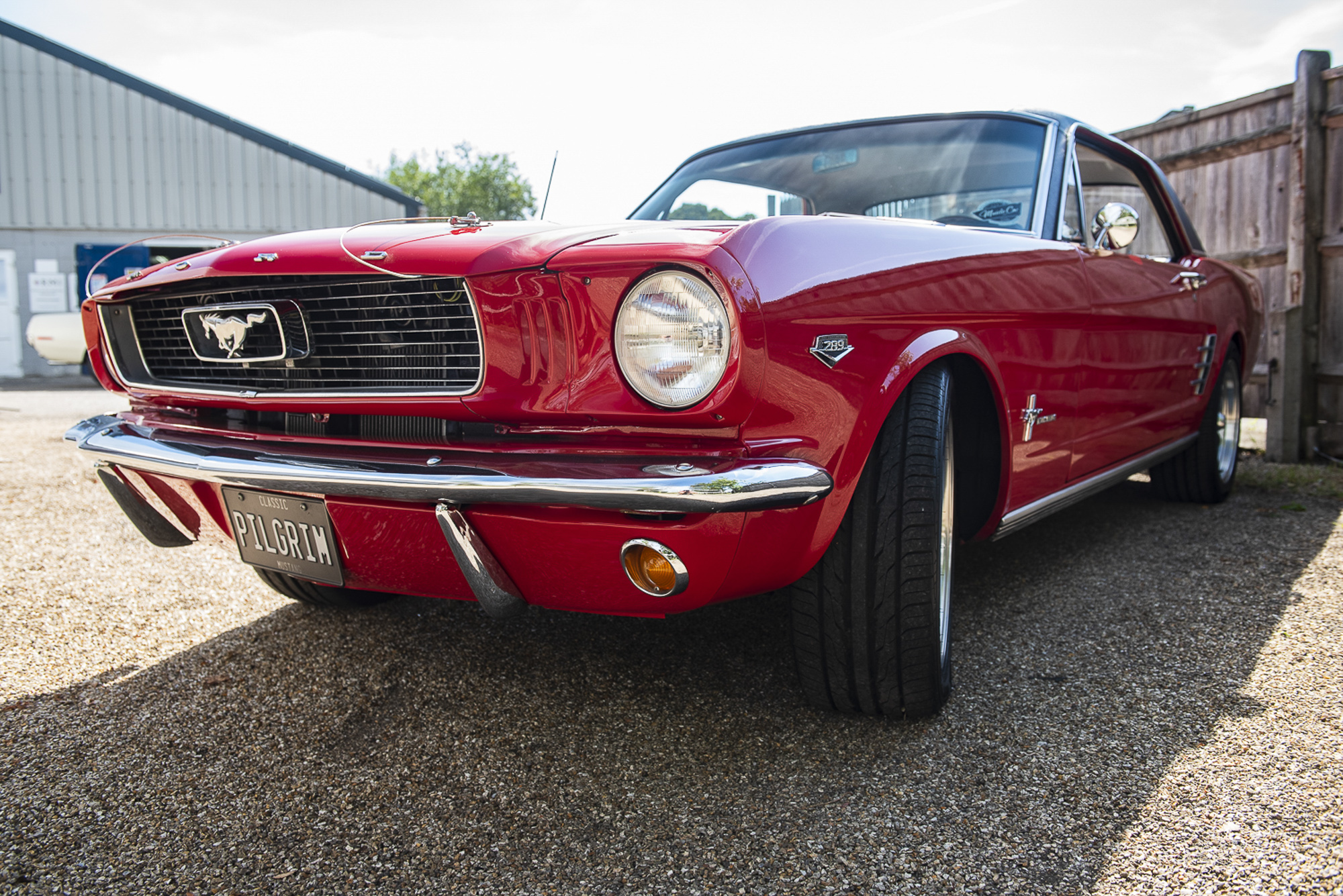 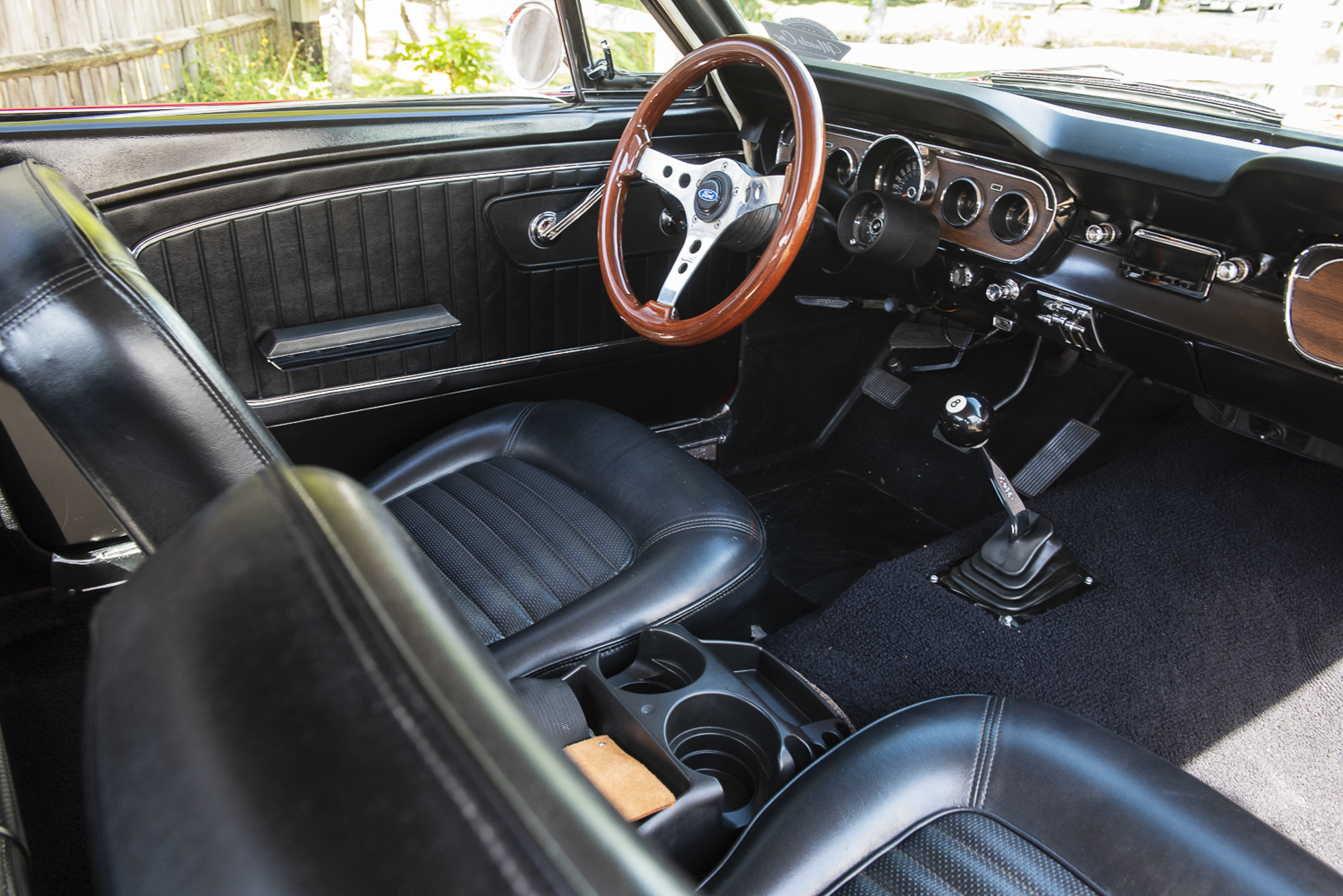 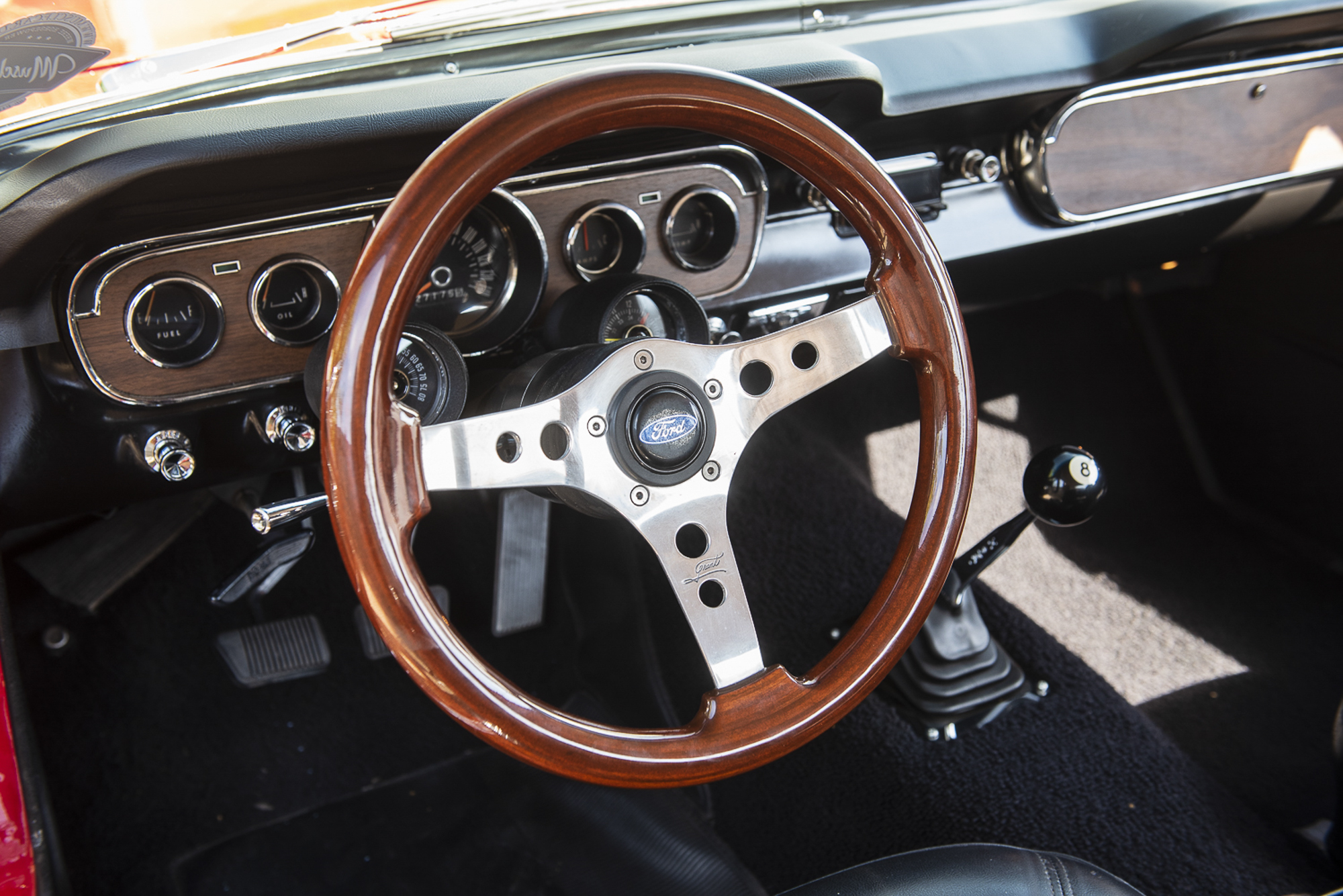 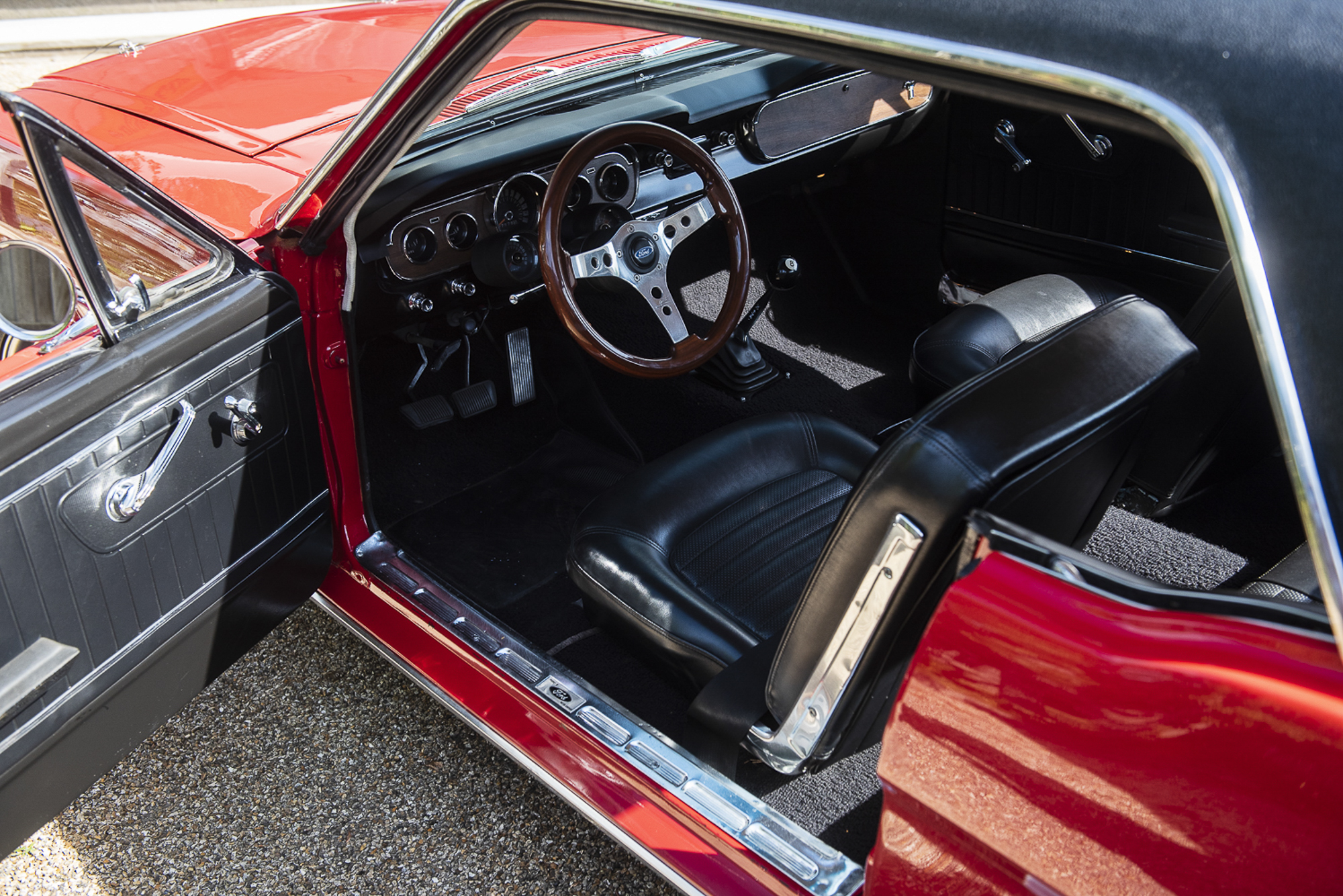 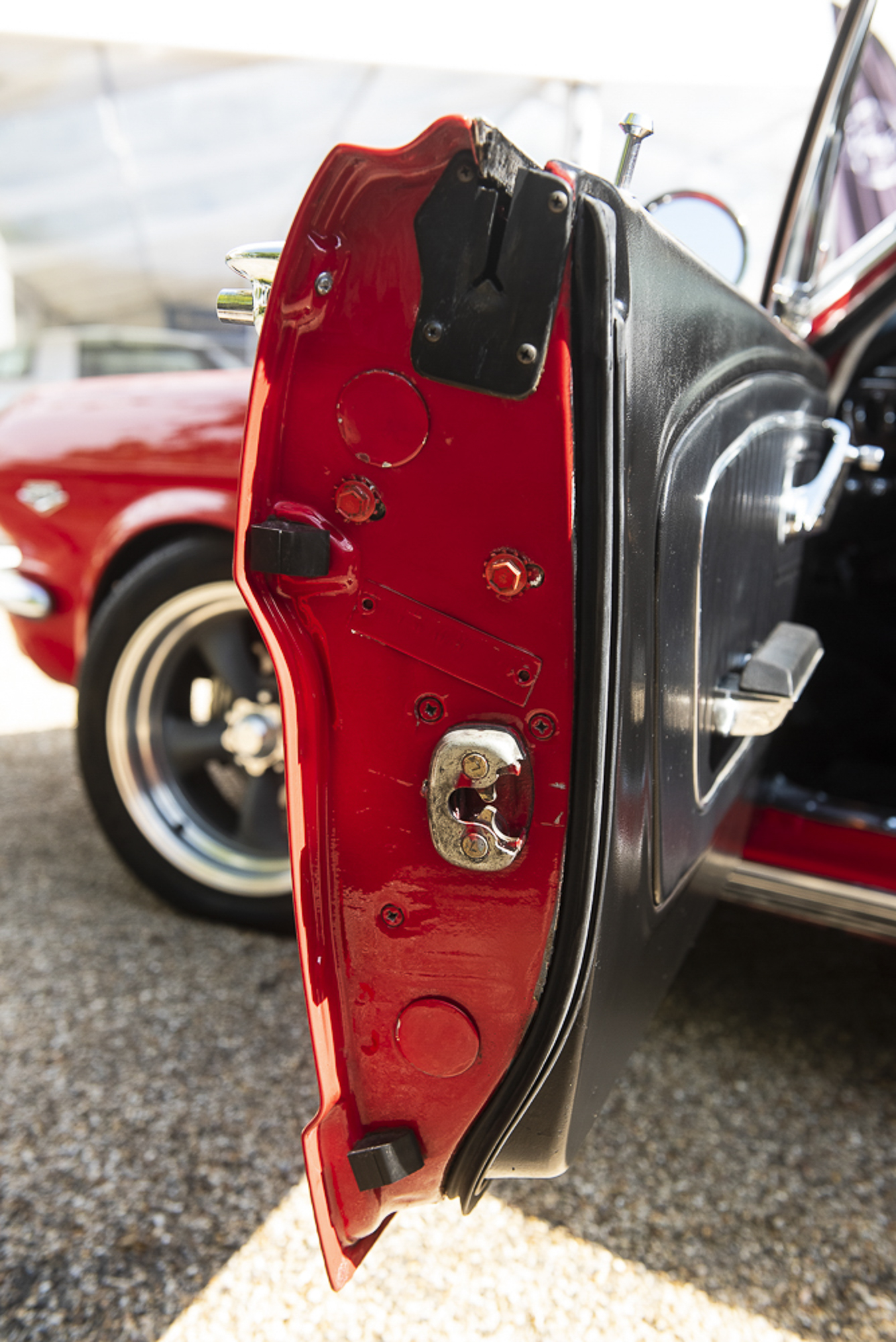 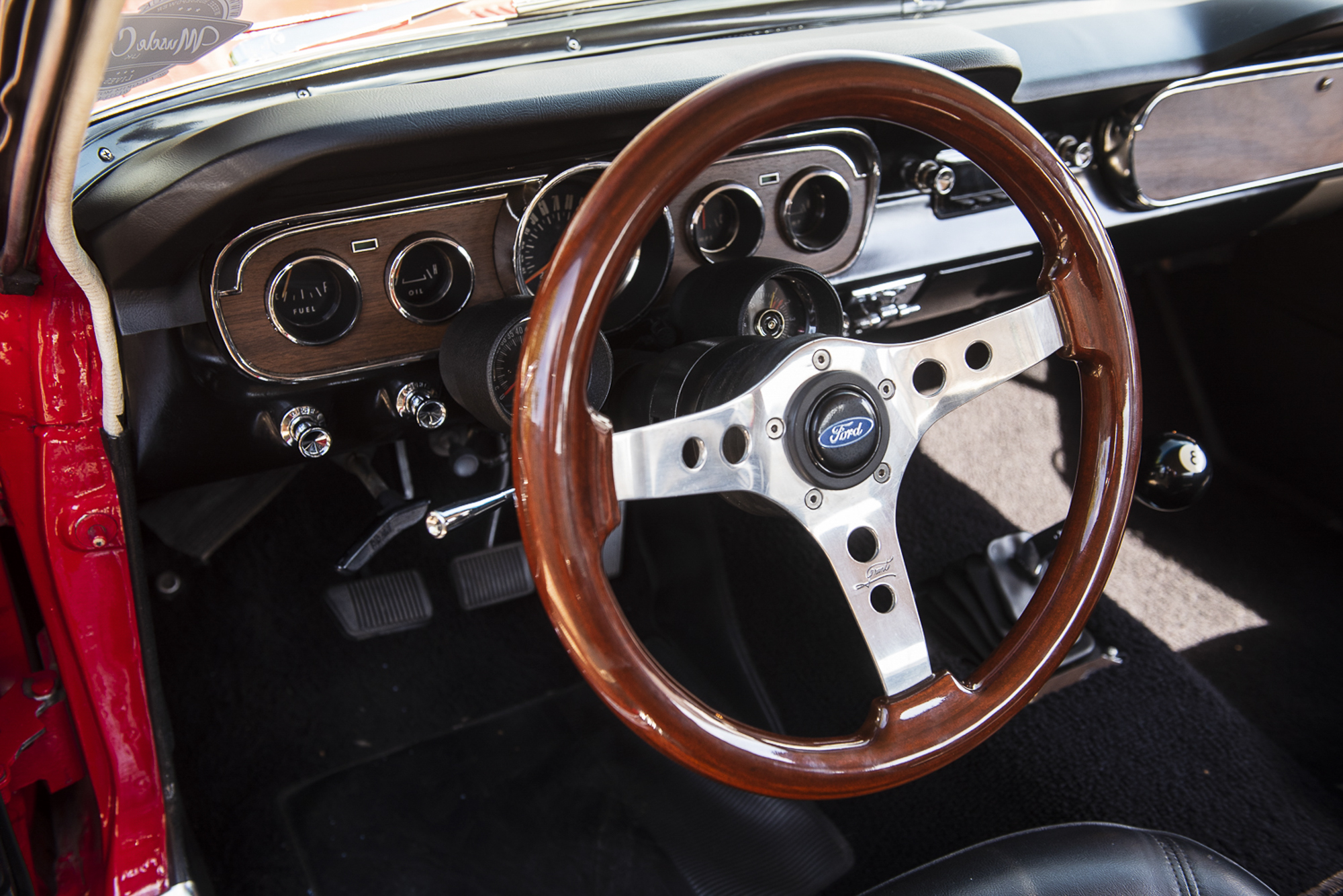 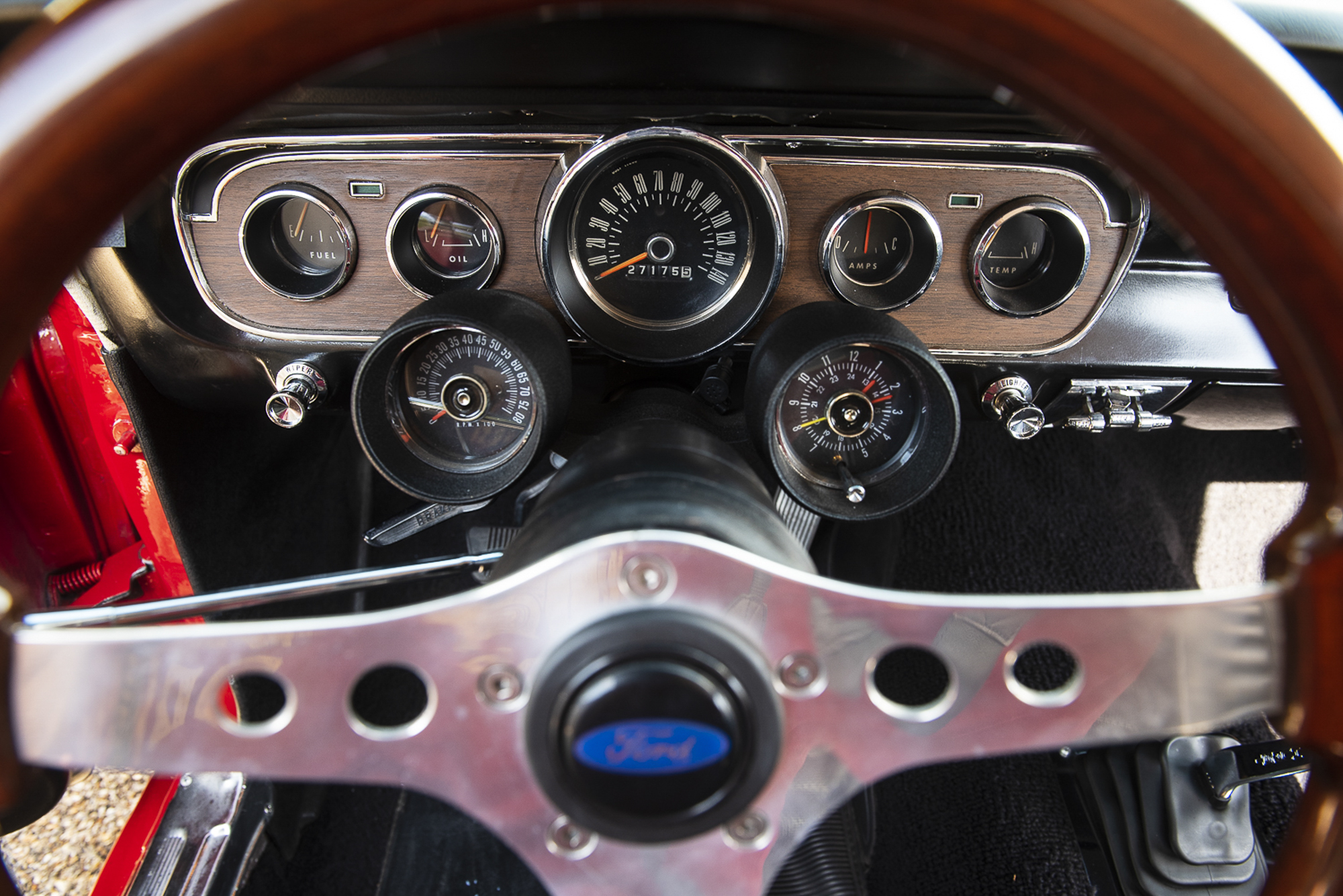 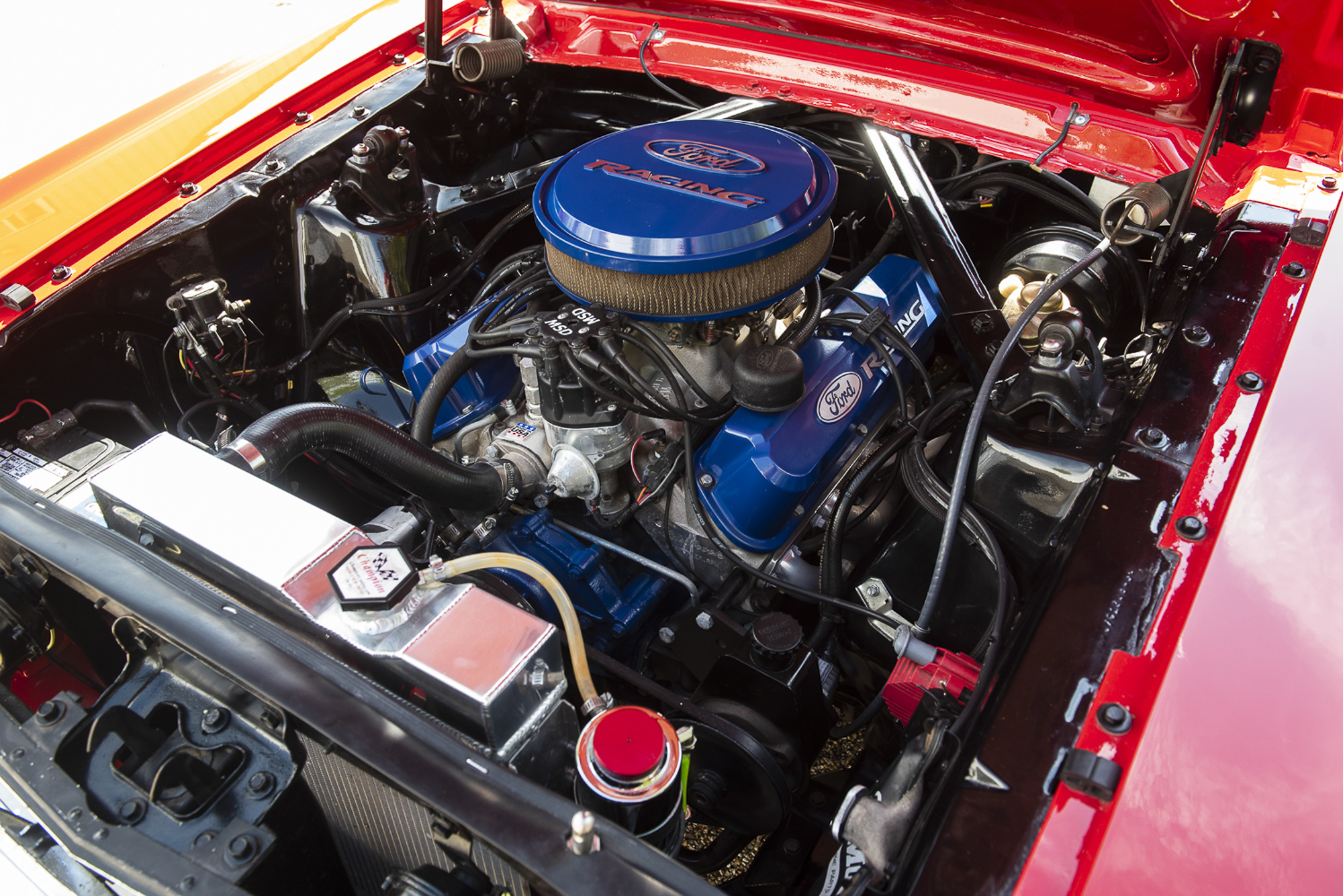 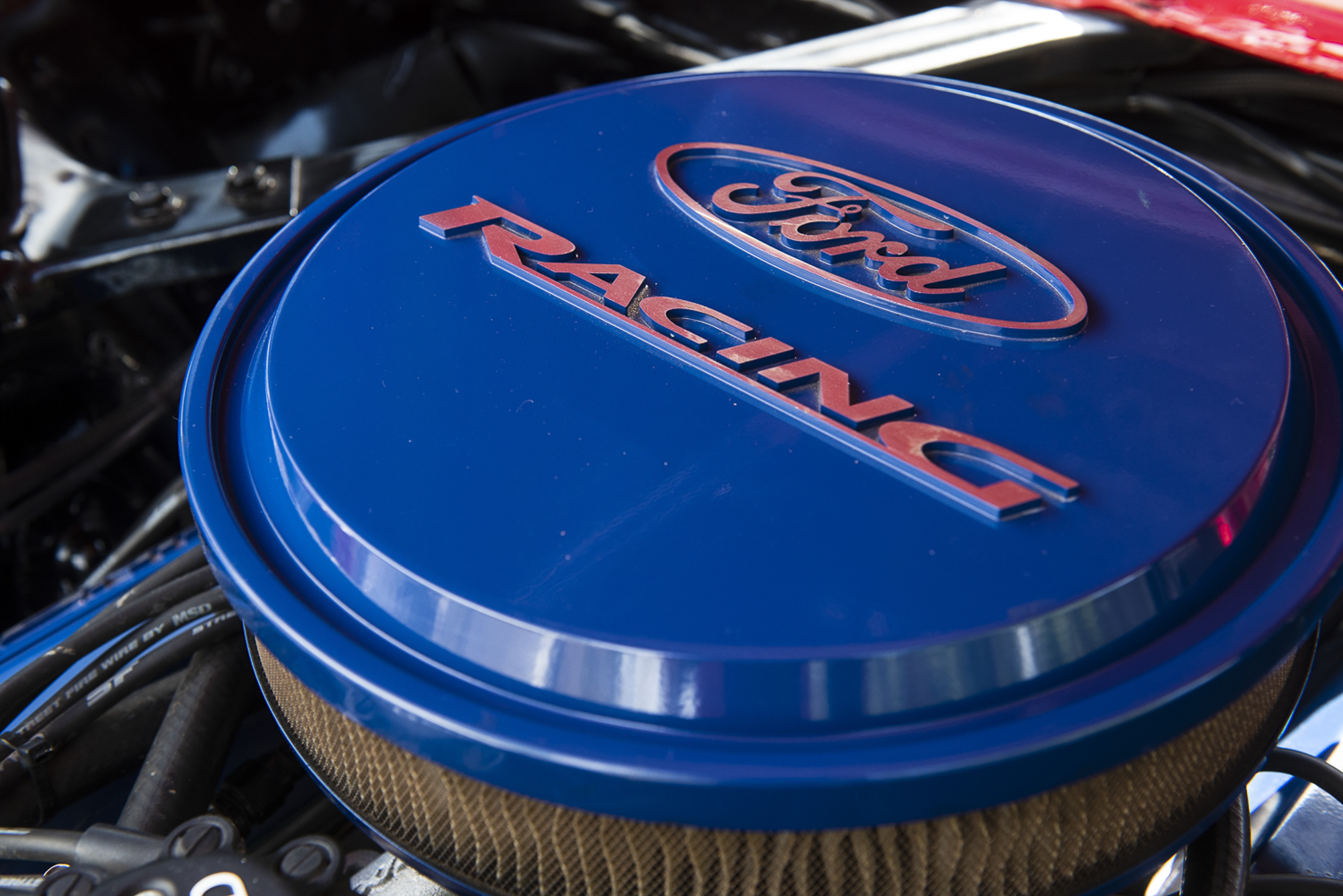 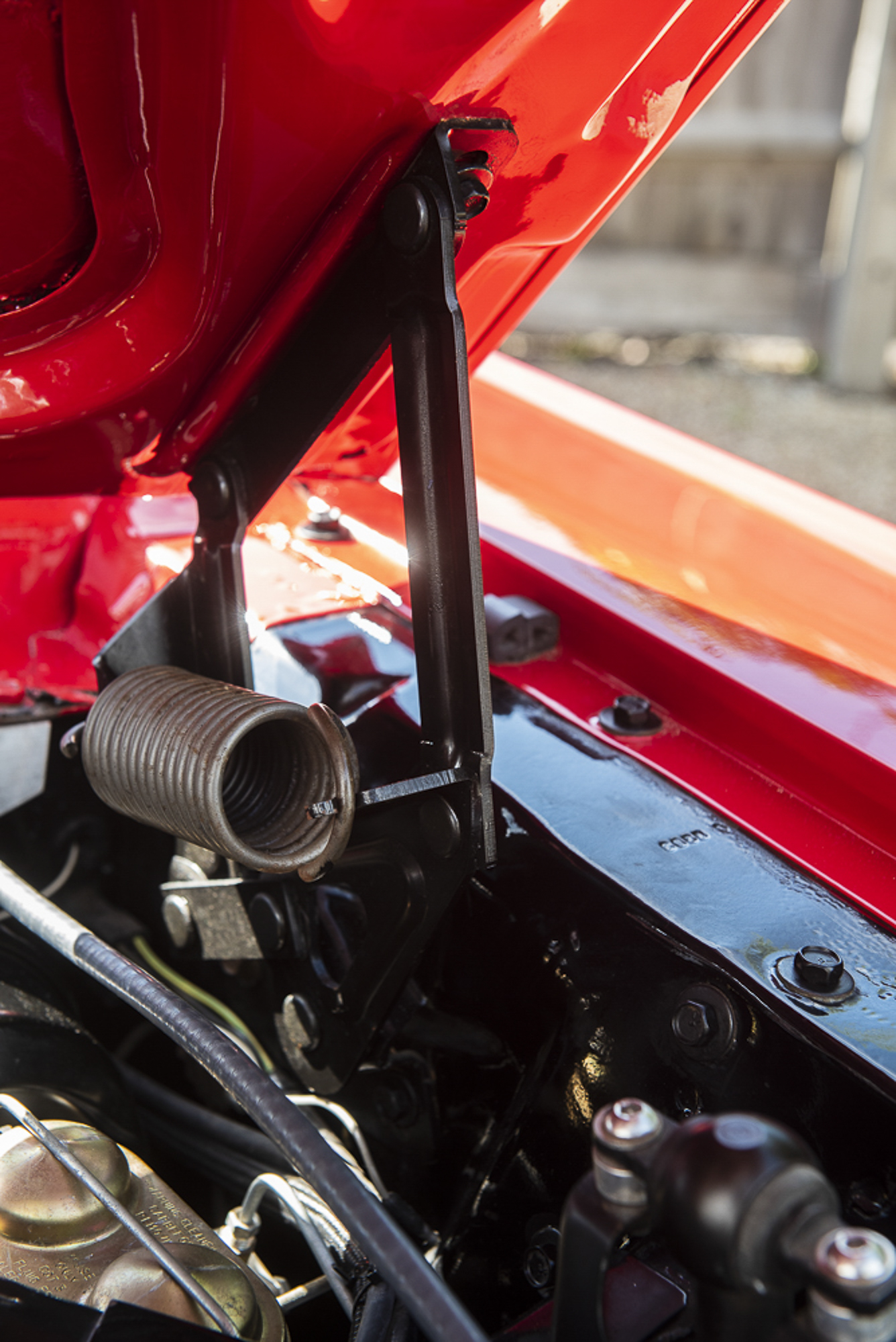 1966 Ford Mustang 332 Cubic Inch Stroker V8 with 5 Speed T5 Transmission, Restomod.
6R07C133845
Signal Red Two Stage Paint with Black Vinyl Roof and Bucket Seat Interior. 331 Cubic Inch Stroked V8 Motor, Edelbrock RPM Aluminium Cylinder Heads, Forged Pistons, I-Beam Rods, Roller Cam Conversion, Hydraulic Roller Tappets, Street True Roller Timing Set, Ultra Pro Mag Rocker Arms, Balanced Rotating Assembly, 5/16” Push Rods, Edelbrock Aluminium Intake Manifold, Edelbrock 4 Barrel Carburettor, MSD 6AL Ignition, MSD Distributer, T5 5 Speed Transmission , 2 1/2” Dual Exhaust with Jet Coated Shorty Headers, 4 Wheel Willwood Disc Brake Conversion, Power Brake Booster, Adjustable Brake Proportioning Valve, Aluminium Radiator with Thermostatic Controlled Fans, Borgeson Power Steering Conversion, 8” Posi Trak Differential, Hotchkiss Lowered Tubular Upper & Lower Control Arms, Upgraded Anti Roll Bar & Locating Arms, Ford Racing Valve Covers & Air Intake. Wood Rim Steering Wheel, Mustang Five Spoke Alloy Wheels.
Combing through the San Diego ads for some good Mustangs I was immediately drawn to the ad for the Mustang with JBA lettering in the front windscreen, and the text in the ad confirmed all works carried out to this car had been done at JBA’s Speed Shop in San Diego.
Now I had actually been to this shop for a “Chrome & Caffeine” morning a couple of years ago, I had met the owner and his sons who had proudly given me a tour of their shop and introduced me to some of their customers. It was a morning to remember with several genuine Shelby Cobras and GT500 Mustangs arriving to complement the great number of really high-end Mustangs and Shelby’s that Bob had in his shop for all sorts of engine tuning and restoration.
By 11:00 the whole place was jammed full of Muscle Cars of every description, between two of the factory buildings a burnout competition was being held to see who could generate the most smoke and lay down the most rubber, Chargers, Mustangs, Cobras, Challengers, Super Bee’s, Javelins, Cougars you name it, all took their turn and the smoke and rubber was incredible.
So you can tell this shop left a lasting impression on me and the opportunity to buy a Mustang Restomoded by JBA’s was very exciting, one problem, I was stuck in the UK and said car was in San Diego, so, I flicked the details over to a good buddy of mine Ron, who ironically I had met that very same morning at JBA’s and asked if he would mind being my eyes and get over and take a look.
Now Ron is a lifetime car guy and has an in-depth knowledge of Mustangs and American Muscle in general and when his report came back describing a really quick, tight & well-built Mustang with excellent fit and finish a deal was struck with the owner James, however we then ran in to problem. James did not want the car to leave the USA and wanted to pull out of the sale. I argued that it was a two-way street with lots of Jags, Triumphs and all sorts of other British cars imported into the States, still no deal. In the end, on the promise of a video of his Mustang being driven through the English countryside being sent back once the car reached our shores, James was back on board.
Well thanks James (your video is on it’s way!) & Ron for getting this one done for us as this Mustang is just as described, it is fast & stable, it brakes really well and does not feel like a 55-year-old car at all. The upgraded suspension has transformed the handling and the braking performance is a match for the power that the fast revving 332 Stroker motor develops.
What is so cool about this Classic Mustang is that it looks from the outside like a really sharp beautifully painted, straight Pony but get behind the wheel and you know instantly that this is not an ordinary ride. Why not come down and find out for yourself! Get behind the 8 Ball! (Come and take a look and that will make sense).