Maverick definition: An unorthodox/independent person who acts free from constraints and organisational guidelines.

The Ford nameplate refers to an unbranded form of cattle. Maverick also applies to the free-roaming mustang and Ford’s pony car, a symbol of the pioneering spirit of the American west.

Ford’s compact car, Maverick (Americas, 1969-1977), was an instant success that would unexpectedly rival the Ford Mustang. Not to be confused with the 4×4 Maverick UK, the all-American Maverick car was affordable, economical, and shared the same long-hood, short deck, fastback profile popularized by Ford’s pony.

Unfortunately underestimated by many today, the Ford Maverick broke the rules of what a compact car could offer, providing great value for money at a time of stringent legislation and frugality.

With a new incarnation arriving in 2021/22, our short car review revisits this Ford classic car.

History and Background of Ford Maverick

Introduced on April 17, 1969, as a 1970 model, the Ford Maverick was initially conceived as a two-door sedan or saloon. Like the Mustang, it used the same platform as Robert McNamara’s lightweight, compact sports car, the Falcon, which had been unable to match the 1964 Mustang’s success.

Whilst the Maverick replaced the Falcon as the main competitor to the Dodge Dart and Chevrolet Nova, its main intention was not to be a performance or muscle car, but to reclaim sales stolen by imports like the VW Beetle, Datsun, Toyota, and Honda.

Positioned between the bigger Mustang and Ford Pinto (1971-1980), the Maverick car was a ‘simple,’ uncomplicated machine that was easier to maintain.

Despite its modest horsepower, the classic Ford Maverick was the ‘answer to low-cost transportation,’ with ‘great gas mileage,’ making it very appealing at a pivotal time for the automobile when the 1973 oil crisis caused fuel prices to skyrocket, and high-performance vehicles like the Mustang II were too expensive to run.

When paired with the race car/muscle-themed appearance package, Grabber or Stallion, the reliable Ford Maverick’s popularity with the youth market was unmatched. Other trims and packages include the 1972 Olympics themed ‘Sprint,’ Luxury Décor Option (LDO), and 1977 ‘Police Package.’

Over 2.1 million Mavericks sold over nine years of production, excluding sales of its clone, the 1971-77 Mercury Comet.

Aside from being manufactured and assembled in the US, the Maverick car was also produced in Canada, Mexico, Venezuela, and from 1970-79 in Brazil. 578,914 1970 Mavericks were produced, breaking the Mustang’s 1965 sales record to become Ford’s most successful car launch. Exceeding the 1970 Mustangs sales, the Maverick’s engine configuration was easy to tune, making it faster and cheaper than their flagship car. Its surprising success led to Ford increasing its prices, resulting in its demise in ‘77.

Mid 1970, a more powerful 250cid I6 automatic was introduced for the Grabber, implying it was both a performance and trim option. Horsepower increased to 155hp, 240 lb-ft torque, with 105mph top speed, 17.9 second ¼ mile and 10.6 second acceleration.

After 1971, the Grabber is a trim option only, bearing the same performance specifications as the Maverick.

The 1971 Maverick had the same engine choices as 1970, alongside a new 302 V8 automatic shared with the Comet. Grabber 302cid offered the highest horsepower and best performance of all Maverick’s model years, with 119mph top speed, 7.8second acceleration, 15.9 second ¼ mile, 210hp, 296 lb-ft torque. 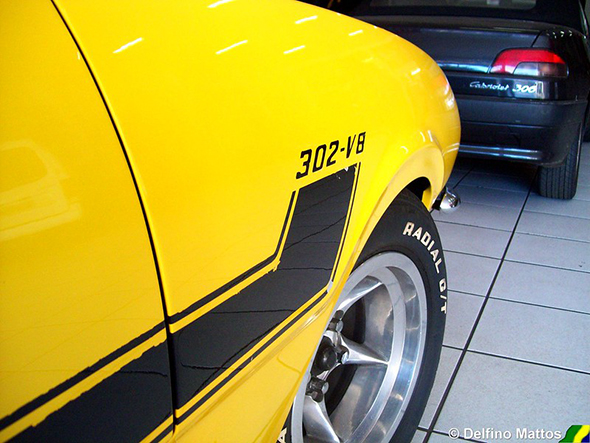 The 1971-77 four-door sedan had the same engine choices as the coupe, but performance was slightly slower.

1973 and ‘74 engines and transmission remained the same. The manual 302cid had similar performance, with 5 less torque.

There was no change to 1975-76 engines/transmissions, although the ’75 302cid was automatic only and slower, with lower horsepower and torque. The 1976 302cid manual was faster with similar specs to 1972, 138hp, 246 lb-ft torque. The Grabber was replaced by the Stallion appearance package for coupes only, in 250cid I6 and the same 302cid V8 manual performance as the base Maverick.

Engines and transmissions remained the same for 1977, with similar performance as 1976.

Early Mavericks had a two spoke steering wheel with horn rings found on other 1969 Fords; the rings were removed in late ‘69.

1971 and 72 models had a special dual dome hood, which is highly sought after today as an aftermarket part.

The Ford Maverick was also cloned by Mercury as the revived Comet (1971-77). Many parts can be interchanged, although the hood, taillight, trim and grille differs.

The 1973 Maverick Grabber was all muscle, with fatter tyres, its optional grille now standard.

The 1974 Maverick car was unchanged, aside from a larger 5mph front and rear bumpers required by government, plus rear quarter panel end caps. Both Maverick and Comet were less attractive than earlier versions.

In 1975, fuel prices decreased but so did Mustang sales. Easy to tune, the Maverick was faster and cheaper. Afraid of its success, Ford increased Maverick prices, suggesting to consumers they could have a Mustang for $400 more.

It worked: Maverick sales declined, and the Mustang II rose.

In 1976, the Stallion package replaced the Grabber. Like Sprint, it was offered on the Pinto, and Mustang, including a special paint scheme and trim, but was nicknamed the ‘Maverick flopper.’ Standard Mavericks had new grilles and front disc brakes.

1977 was the Maverick’s final year, remaining unchanged aside from a ‘Police Package,’ which was not upgraded enough for police use and sold less than 400 units. Pop out windows were a distinctive feature on 2-door Mavericks and Comets.

The base ‘77 model and 4-door continued until the introduction of the Fox-platform 1978 Fairmont and Mercury Zephyr.

The classic Ford Maverick car has appeared in many films and tv shows as a minor action or background vehicle.

A 458cid 1971 Maverick, nicknamed ‘Lil Legend, is seen on the TV show Street Outlaws, driven by Bobby Ducote who prides himself on owing the fastest small tire car anywhere.

A rugged 1971 Maverick powered by a 350hp 302cid V8 appears in Fast Five, driven by character Han Seoul-Oh in Rio de Janeiro. According to insidelinevideo, the filmmakers included the car as it is one of the most popular muscle cars in Brazilian culture and fun to drive.

The Maverick nameplate is being revived in mid-2021 as a 2022 model, but not as a sporty looking coupe or sedan.

The modern Maverick has been designed as a compact 4×4, four-door pickup truck. A photo of the tailgate was leaked in July 2020, confirming its name, with several pictures of the prototype since.

The Maverick pickup is an exciting transition for Ford truck enthusiasts. It will share components and Ford’s C2 platform with the Bronco Sport crossover utility vehicle, although longer. It is reportedly based on the Ford Transit connect, smaller in size than the 2019 fourth generation Ranger. The 4×4 will be produced in Mexico and available for North and South America.

Some muscle car fans might ridicule the Maverick for its low horsepower and lack of performance focus, aside from the ‘71 Grabber perhaps, saying it isn’t in the same league.

Although not intending to be a muscle car, the classic Ford Maverick had an edgy, nonconformist personality that reignited American muscle car enthusiasm in just four years, outshining its muscle counterpart. Without its existence, the Mustang would have failed on its own.

The Maverick car defied expectations of what a small, compact vehicle could offer. It looked like a race car whilst overcoming ‘70s adversity in a way its competitors could not. With the right combination of options, the Maverick delivered tremendous value.

A rare car, it is not often found for sale in the UK.