Barracuda [ber-ə-ˈkü-də]: A large, predatory fish found in warm water. Fast and slender, it has an aggressive appearance and behaviour.

Reflected in its logo, Plymouth Barracuda and its aggressive incarnation ‘Cuda are frequently cited alongside the Ford Mustang and Chevrolet Camaro as a legendary pony car and iconic muscle car. To find out why, here is our short car review, looking at the model years and specs that made this car one of the most popular American classic cars to this day.

The early sixties were a time of economic plenty and optimism, with the ‘Big Three’ American automobile manufacturers Chrysler, Ford and Chevrolet, competing to dominate the youth market with affordable, mid-size performance cars.

Due to Chrysler’s limited budget, the Barracuda was a hardtop two-door fastback version of their compact car, Plymouth Valiant, with the largest rear window glass ever fitted to a production car.

First-generation (1964-66) Barracudas had 106inch wheelbase, small-block engines, and powertrains (power-generating components ie engine and transmission) identical to the Valiant’s. The highest performance option in ‘64 was the popular 273 cubic inch displacement (cid) LA V8, making it faster than a Mustang.

Mopar (Motor Parts) muscle power culminated in the late ‘60s and early ‘70s, with special performance packages and 440cid, transforming the Barracuda into rear wheel drive coupe and legendary muscle car. ‘70-74 ‘Cuda’s had a Chrysler E-body, sharing a similar design to the Dodge Challenger R/T and the same 383 engines.

Barracudas and ‘Cudas were not interchangeable. Barracudas did not have a hemi engine with hemispherical-shaped combustion chambers. The ‘Cuda was the high-performance derivation with 426 hemi big-blocks, or ‘426 hemi’. The 426 Super Stock hemi was the notorious power behind 26 drag racing records in one season and 11.39 second ¼ mile time, alongside Richard Petty’s ‘67 NASCAR Championship win.

Muscle car marketing was full of entertaining bravado, with Ford, Chevrolet, Dodge and Plymouth flexing their muscles. Chrysler’s advertisements for the ‘70’s hemi ‘Cuda was: “our angriest body wrapped around’ ol King Kong himself.”

Four-speed manual was standard from 1964-66, with ‘64 offering the first and last year for push-control on optional Torqueflite automatic transmission. Base price $2,512. 23,443 produced.

The 1965 Plymouth Barracuda base engine was a 225cid ‘six pack’ in the US (170 in Canada). The 273cid was upgraded to a Commando V8, increasing power output to 235hp. The inaugural Formula ‘S’ package included the Commando, with heavy-duty springs and shocks, and wide-rim 14-inch wheels.

The ‘67 Barracuda had a base 225cid, with the choice between two-and-four-barrel 273cid. Convertibles were introduced with the aggressive Formula S 383cid (6.3L) B V8, 280bhp. Second-generation models had a 108-inch wheelbase.

The new 1969 ‘Cuda package, based on the Formula S, was limited to performance variants with 340, 383, and the 440cid, four-barrel Super Commando V8, a result of Plymouth’s collaboration with Hurst/Campbell. The 440 boasted the largest engine displacement of any pony car before, producing 375hp at 4600 rpm and 480 torque at 3200 rpm.

The 1969 ‘Cuda was ‘shoehorned’ into fastbacks and coupes, overcrowding the engine bay and preventing the inclusion of power steering and power brakes. Instead of a four-speed manual, engineers fitted Torqueflite from Plymouth’s family cars. 57% of weight over the front axle meant poor manoeuvrability at low speed. 0-60mph in 5.6 seconds, with 14.01 second ¼ mile at 104mph.

Both the 1970 AAR Cuda and Dodge Challenger T/A were built to qualify their Trans Am racing versions.

Performance engine compression ratios were reduced in 1971, except for the 426cid and 440 RB V8s. It was the last year for the 426 hemi, with no AAR Cuda made that year. Increased emissions and safety regulations meant only small-blocks were offered in ‘72 until the Barracuda was discontinued in 1974.

First-generation ‘64-66 Barracudas were based on the reliable ‘50s four-door family sedan Plymouth Valiant. Plymouth utilised Chrysler’s A-body platform and chassis, changing the front end. Wraparound glass made the car extremely hot but ensured great visibility. Bucket seats were standard. Its similarity to the Valiant may have influenced its 23,443 sales in ‘64, compared to the Mustang’s 126,538.

’68 had round side lamps. ‘69 models had non-functional hood scoops, available as two-door hardtop coupes, fastbacks, and convertibles. The Plymouth Duster succeeded the sporty Valiant-Barracuda.

The 1970 Plymouth Barracuda was redesigned on a Chrysler E-body. No longer Valiants, they shared the Dodge Challenger’s styling, aside from the latter’s two-inch longer wheelbase.

70-71 models were base Barracudas, luxury Gran Coupes and sporty Cudas. The performance variant was a mean ‘Cuda within the ‘Rapid Transit System,’ boasting engine displacements on the hood scoop. The 426 Hemi simply said ‘hemicuda’.

‘70s Cudas were striking: 440s had optional inverted hockey sticks, functional shaker hoods and black or blue interiors. With High-Impact colours like Lemon Twist, Sassy Green, In-Violet or ‘Plum Crazy,’ Blue Metallic, Tor-Red, and Lime-Light, the Cuda’s non-conformist image guaranteed its owner stood out from the crowd. 654 hardtops (of 17,242 built) and 14 convertibles (of 550) were hemis.

1971 hemi ‘Cuda had shaker hoods and pins, fender gills and lights, pistol/slap-stick grip, and four headlights. 374 convertibles built, with 5 automatics. Eleven convertibles had the 426 hemi, with three having 4-speed manual.

1972 and 1973 Plymouth Barracuda had new grilles and round taillights, remaining the same until new stripes were added in ’74.

A yellow 1971 hemi ‘Cuda convertible with white interior lends a macho presence to the 1996-2001 television series, bequeathed to San Francisco police officer Bridges by his brother, who is deployed in Vietnam. Simultaneously aggressive and sunny, the flashy ‘Cuda is “probably the finest muscle car ever made on the planet,” projecting Nash’s assertive personality and amateur magician skills.

Did you know? Five 1970-1971 ‘Cuda and Barracuda convertibles, plus an FX ‘73 coupe-turned-convertible, were transformed into ‘71 Hemi ‘Cuda convertibles for the series. All had 318-440cid engines, rather than hemis.

Actor Don Johnson, of Miami Vice success, revealed that USA Network was developing a two-hour Nash Bridges film, though it’s not clear whether the ‘Cuda will return.

A modified black 1970 Plymouth AAR hemi ‘Cuda is seen parked on Toretto’s driveway in the sixth instalment. In the seventh, Letty uses it to win a quarter mile drag race at ‘Race Wars’ against an Audi R8. Its good looks and angry grunt give it an imposing presence on both the street and track.

|| Fun fact: The film’s ‘70 ‘Cuda was built by Dave Salvaggio in the ‘90s, with additional horsepower.

2021 Dodge Barracuda: Unconfirmed rumours suggest the car’s return under the Dodge brand, with the look of the original.

Initially a heavily-disguised Valiant, the Plymouth Barracuda resulted in depleted sales. However, its efficient small-block and performance packages enabled its transformation into the aggressive 1969 ‘Cuda 440cid: the largest displacement engine ever for a pony car. It achieved muscle car status in the ‘70-71 model years, with Mopar’s infamous 426cid hemi and distinctive looks.

This car review can assert that all Barracudas are collectable classics, with first generation models relatively affordable and their engine parts readily available. Both variants are sold as low as five or six figures through private sellers, auction-houses, car dealerships, or publications like Hemmings.

The car’s enduring legacy is reflected in popular culture. As Nash Bridges would say in his Official ‘Cuda Rules: “No eating, no drinking, no smoking, no profanity, no sweating, no disrespect of any kind, while you’re in or around the ‘Cuda.”

Muscle Car UK currently have a 1967 Plymouth Barracuda Coupe for sale in the UK: 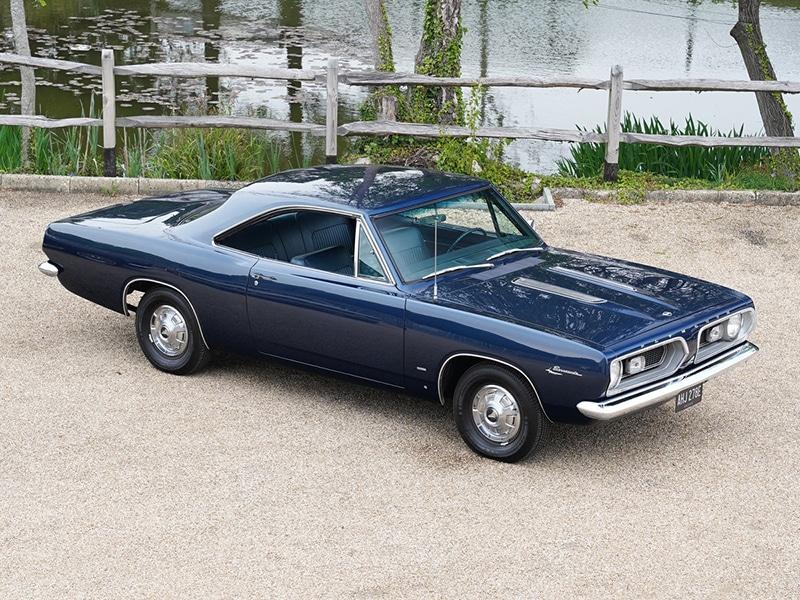 Muscle Car UK is the UK’s leading specialist Mustang and Muscle Car dealership. We import American muscle cars from the US, restore them here in the UK, and re-home them with our delighted customers.