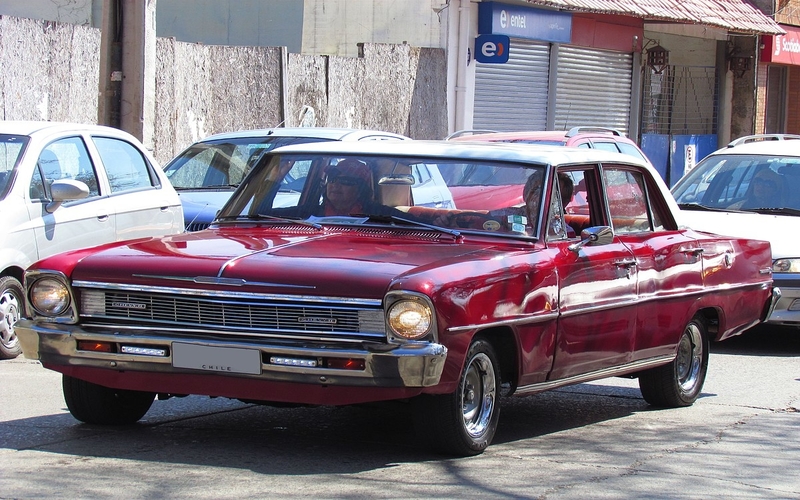 One of the fastest new-car development programs in the history of General Motors, the Nova (also labelled as “Chevy II” and “Chevy II/Nova” in different models) was Chevrolet’s solution for an affordable compact car. It was initially intended to compete against the Ford Falcon, a competition that would last years.

During its eighteen years of production, Chevy Nova went from a small affordable car to a legendary (still affordable) muscle car, offering a wide range of body styles, specs, and variations.

But a great start doesn’t guarantee a great ending. The last generation of the Nova was not much of a success. Nonetheless, this does not overshadow the significant effect of some of the previous generations on compact and muscle cars, from the worlds of commuters to drag racers and drag strips. 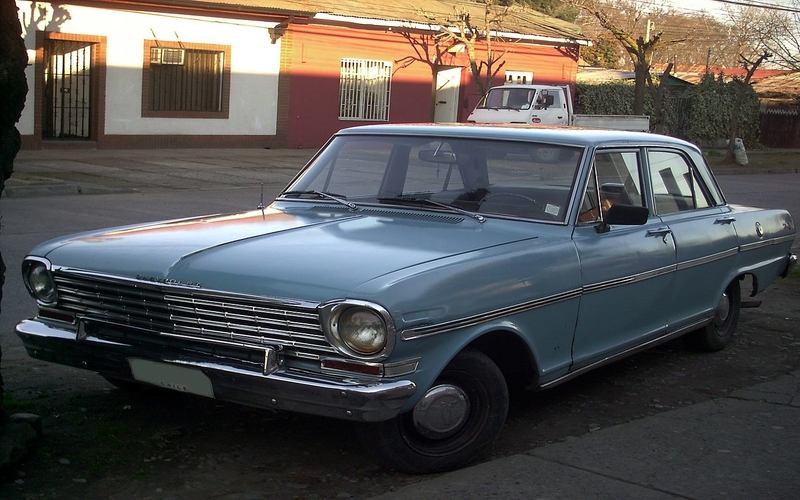 With Ford’s successful release of the 1960 Falcon, American compact cars gained huge popularity. Chevrolet’s plan for this booming trend was to create a car that was both affordable and desirable. Soon after, they manufactured the 1962 Chevy II; a car that was built on General Motors’ X-body platform.

Chevrolet’s intention wasn’t to make a revolutionary car out of the 1962 Chevy II. Rather, it was meant to be a simple compact car for Chevrolet buyers.

Choosing the name for this model was the topic of a lot of debate in the Chevrolet Organization. At the last minute, they decided to go with “Chevy II” instead of “Nova” for the main title of this model, seemingly because Nova didn’t start with a “C.” However, the name “Nova” still made it to the first-year model but only as the tagline for the top-of-the-line series. In 1969, Chevrolet would rename the car Nova and drop Chevy II.

Chevy II was a lot like the Ford Falcon it was modelled after. The 1962 model came in different body styles: sedans, wagons, a two-door hardtop, and a convertible. Ford Falcon offered the same styles plus two more to the customers; a two-door wagon/sedan and a coupe utility. (Chevrolet probably avoided those options in order not to compete with its own El Camino.)

The golden era for the Nova was the year models 1968-1974. Chevrolet’s redesign in 1968 made the series look tougher and buffed. With an increase in the length of the wheelbase, Chevrolet Nova looked more like a muscle car. The models throughout and long after these years gained so much popularity that they became America’s favourite classic compact car.

The 1968 model was not available in the station/wagon configuration, only offering a 2-door coupe and a 4-door sedan. For the 1973 & 1974 models, Chevrolet added 2-door hatchback models to the lineup.

The exterior design didn’t see any dramatic changes from ‘68 to ‘72. But for the 73 and 74 models, the exterior had a facelift, changes in rear taillights, and new front and rear bumpers.

Despite offering mainly I6 engines through 68 to 74, Chevy Nova remained popular. One of the reasons was that you could easily drop a small-block or a big-block V8 engine under a Nova’s hood. Especially since the Nova was so lightweight, with a V8 engine the power-to-weight ratio would be far superior compared to the other muscle cars in that generation.

A 250 cu in 6-cylinder (I6) engine option, which was the most popular version, was one of the engine variations available throughout 68 to 74 (along with a small-block 350 cu in V8 engine which was also fairly popular back then). 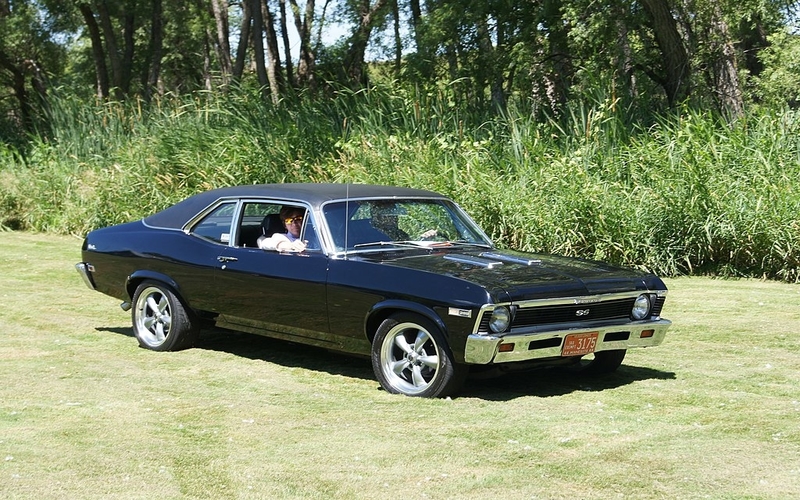 With the doomed fate of Chevrolet’s first compact, the Corvair, the company introduced the Chevy II to compete with Ford’s hugely successful 1960 Falcon, and Nova was the top trim level of the compact.

Chevy II was available in 4 different body types; two-door coupe and four-door sedan, convertible, and station wagon models. The 1962 Chevy II came in (nearly) four series and five bodies—the 100 Series, an almost immediately discontinued 200 series, the 300 Series, and the Nova 400 Series; with the sportiest being the Nova 400 convertible.

From 1963 to 1965, Chevrolet introduced the SS package and expanded the V-8 lineup with 250- and 300-horsepower versions of the 327 cid (5.4-liter). But each time the sales took a dive mainly due to internal competition, first from the new mid-size Chevelle and next the 1965 Corvair. The 1965 Chevy II was also losing to Ford, which sold nearly double the Falcons. 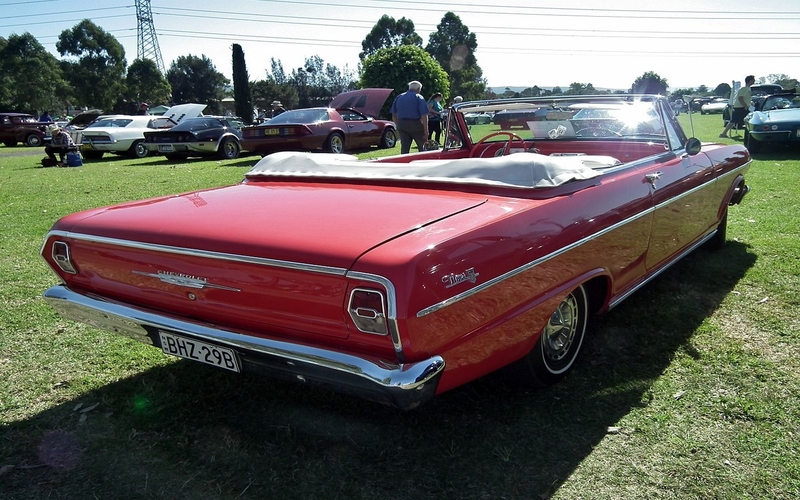 1966 Chevy IIs came out with a significant restyling of the first generation, with its features remaining the same but in squared up dimensions.

For just $159 (now equal to 898.98€ in the UK) added on a Nova 400, you could upgrade to a Nova Super Sport. While the Nova SS (only available as a Sport Coupe) was the top of the line, any Chevy II (excluding four-cylinder) engine could be joined with the SS.

Interestingly, while the Super Sport was advertised as the “Chevrolet Chevy II Nova Super Sport,” the “Nova” nameplate was placed nowhere on the body.

The 1967 improvements focused mainly on safety, including features such as an energy-absorbing steering column and sun visors. And while sales continued to pick up, they soon took a hit from another internal competition, the 1967 Camaro.

The Name Chevy II was eventually erased after 1968. This complete redesign had many similarities with the Chevelle (mainly in the modern semi-fastback styling and the 111-inch wheelbase) but the front subframe design was unique to the Nova. The only models offered were two- and four-door sedans.

In 1969, Chevrolet officially pulled the Chevy II name. The car was now the Chevrolet Nova, and only “Nova” in the brochures. For the next few years, the model changes would be mainly limited to engines.

With 1973 came the hatchback version of the 2-door Nova, introduced in the second-to-last year of the model’s life. This model featured both front and rear-end redesigns, especially in the bumpers after a government safety mandate. Parking lights were also moved to the crosshatch grille and the rear windows were modified to no-door window vents.

The 1974 Nova also included bumper updates with more safety features, and its tailing panel was no longer black.

Sales continued to spike as they had since 1972, not least due to the first energy crisis caused by Middle Eastern countries dropping oil exports, which made compacts a prudent and decent option for many Americans minding their bill.

1974 was the last year for the Nova body style as we know it. The 1975–1979 models (fifth generation) lost the ‘60s curves, but still gave a nod to the 1968–1974 design, especially by keeping Nova’s efficient 111-inch wheelbase. “Now it’s beautiful,” was the final praise given to this redesign by the brochure. The 1979 Chevrolet Nova remains a sought-after model to this day. 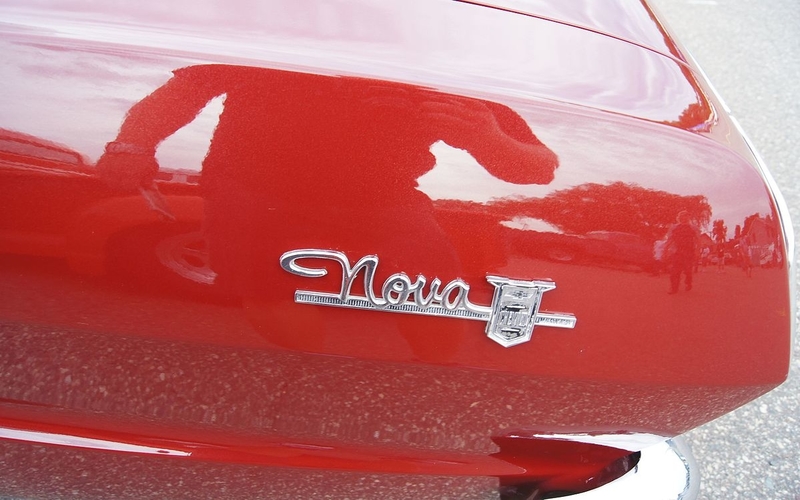 The Nova was a household name when it came to cars in the cinema. It had numerous appearances in different movies, genres, and decades. There’s a long list of Novas in Hollywood, but to name a few, you can spot them in pictures such as Bad Boys, Beverly Hills Cop, Coming to America, Footloose, Forrest Gump, Godfather, Good Will Hunting, Memento, Rocky V, and Terminator.

Probably the biggest fan of the Chevy Nova in the cinematic world is the famous director Quentin Tarantino. He chose a 1970 Chevy Nova as the car in his movie Death Proof. Nova also appears in Reservoir Dogs and Pulp Fiction.

But Nova’s appearances don’t end here. This beautiful car also appears in lots of TV commercials like Budweiser commercials and Castrol Motor Oil ads. The music world is a big fan of Nova too. While there are many sightings of this car in music videos, we can say for sure that the band Metallica loves it. 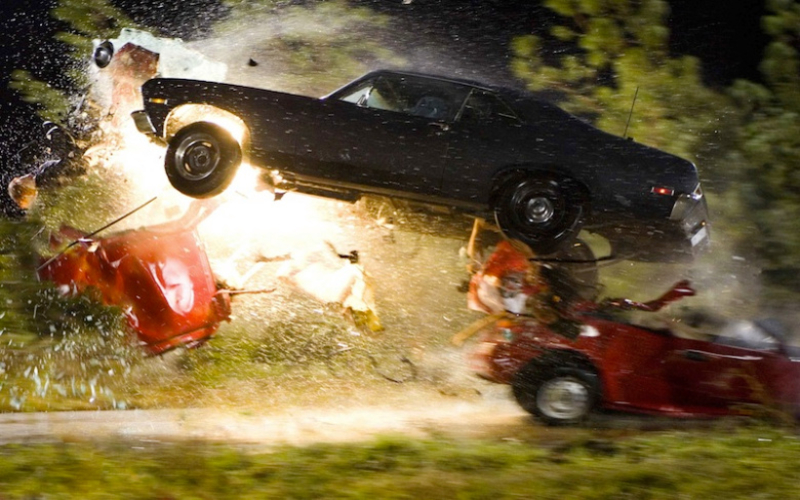 From a small economical car to a legendary muscle car, the Chevy II/Nova offered a variety of models, specs, and body styles through its 18 years of production. The models from 68 to 74 left a big mark in the history of American classic compact cars, and their exterior design became one of Chevrolet’s most successful car designs in their own era.

Despite the relative failure of the 6th generation of the Nova, we think the greatness in the 4th and the 5th generation allow this car to be among the most popular compact classic cars of the 60s and the 70s.