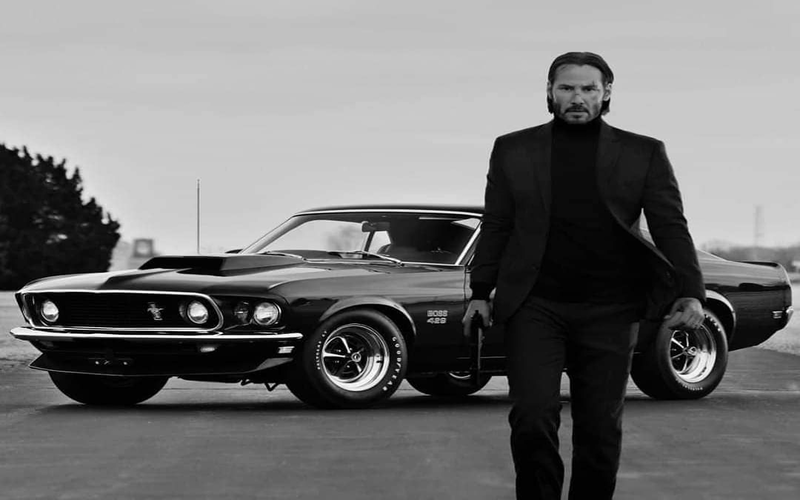 Throughout history, there have been many iconic cars of the silver screen. Some movie cars help define a character while other films revolve around the car itself, and in some cases, the car is a character. From Tom Cruise to James Bond and Steve McQueen, from Tokyo to Las Vegas, from Ford Mustang GT Fastbacks to Plymouth Furys and Dodge Chargers, many muscle cars have helped promote a movie franchise.

One classic muscle car that is certainly not camera shy is the Ford Mustang. It can be seen all across Hollywood’s biggest hits, including Bullit, Gone in 60 Seconds, the second installment of the Fast and Furious franchise (Tokyo Drift), Gold Finger, and of course John Wick.

This John Wick review will be a little different to most as we’ll be taking a look at the second biggest character in the film aside from John Wick himself; the Ford Mustang ‘Boss 429’ (you’ll see why we need inverted commas there in a bit!) 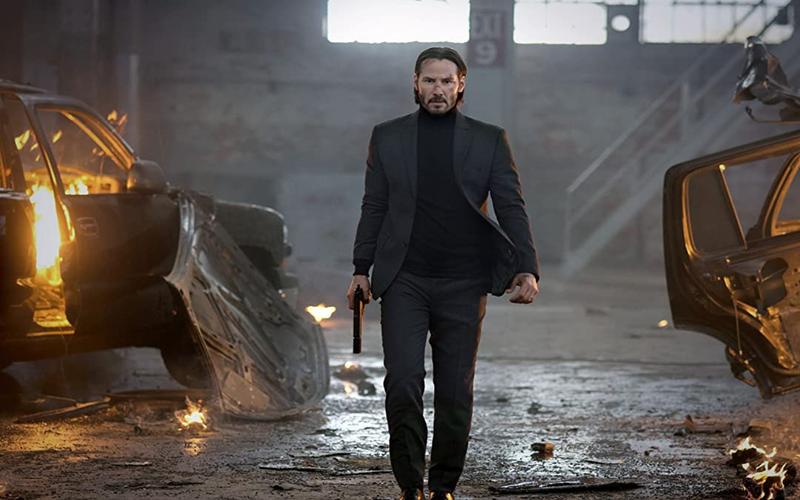 For those who haven’t seen the original John Wick, it is an action film starring Keanu Reeves as John Wick, an ex-assassin. Released in 2014 and directed by Chad Stahelski, John Wick grossed $86 million at the box office. John Wick was such a success that it has since been followed up with two sequels; John Wick: Chapter 2 (2017) and John Wick: Chapter 3 – Parabellum (2019).

In the film, John Wick is a mysterious and gruff ex-hitman who has recently lost his wife to a terminal illness. In the beginning of the film, we see John’s life spiralling as he realises he’s now alone in his rather large, empty house until a knock at the door one night. A courier brings an adorable beagle puppy, sent from his wife before she died, with a note saying that she wanted him to have something to love when she’s gone, as “the car doesn’t coun”’.

The car in question is a 1969 Ford Mustang, not a 1969 Ford Mustang Boss 429. We see John Wick take the car out to a gas station to get the puppy some kibble, and as he’s filling up he’s approached by a man who notices his car; “Nice ride. Mustang, Boss 429. She a ‘70?”. For some reason, John corrects the man saying that it is in fact a 1969 mode, though strangely doesn’t correct him that it is in fact not a Boss 429.

That night, Wick wakes up to find masked men in the house who beat him half to death, kill his puppy and steal his car (and we thought we had it rough in 2020!). The rest of the film is John Wick seeking revenge on those who stole his precious Mustang and killed his puppy, with fistfights, shootouts and some car wrecks thrown in for added flair.

The film does lack in car chases compared to some other action films featuring muscle cars, such as Gone in 60 Seconds with that ridiculous half-hour-long car chase. Despite this, you still have to give the filmmakers props for showing off the cars they do use in small doses. They even give us hints to racing nostalgia in the film, with a glimpse of a replica Ford GT40 in Aurelio’s workshop (famed for taking the title at the 1964 Le Mans).

Even if it’s not particularly a car movie, there was clearly a lot of effort put into these scenes, with Keanu Reeves actually doing all of his own stunt driving, save for the last moment of one scene where he stops inches short of a dump truck (a stunt driver did that part). In the sequel, it took 7 or 8 attempts to get the shot of the John Wick 2 car jumping and they completely destroyed one of the Mustangs they had on hand.

So, because we’re crazy about Ford Mustangs here at Muscle Car UK, of course we have to put the spotlight on John Wick’s beautiful ride. But if it’s not in fact a Boss 429, what car does John Wick drive? 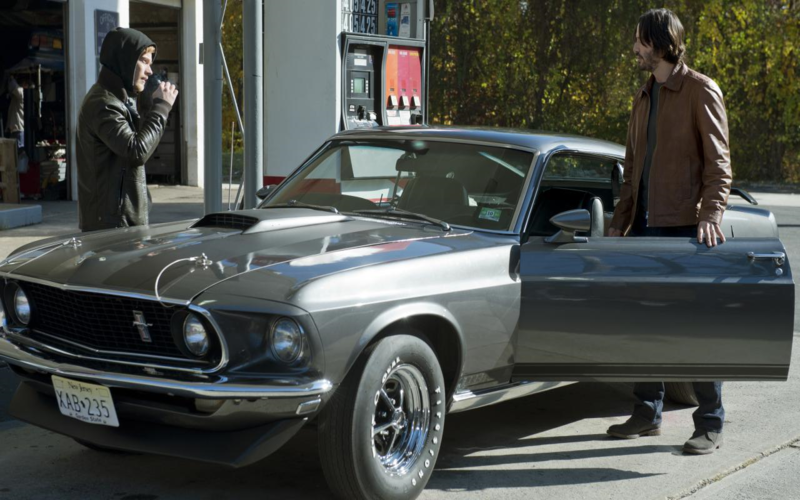 The Ford Mustang that John Wick drives in the film is sometimes known as the Hitman Mustang. Despite being called a Boss 429 in the movie, the five Mustangs used in the film are actually 1969 Mach 1 Ford Mustangs. The main giveaway is that John Wick’s car is an automatic (which we see when he slams it into reverse in the sequel), whereas 1969 Boss 429 Mustangs were only fitted with 4-speed manual transmissions.

Another big difference is that the 1969 and ‘70 Mach 1 Mustangs came with a non-functional hood scoop as standard; completely differing from the functional prominent hood scoop on a Boss 429 (to this day, the 1969 Boss 429 hood scoop is in fact the largest scoop ever fitted on a Ford). John Wick’s car also has a chin splitter and rear spoiler which was not available on the Boss 429, as well as exposed hood pins: hood pins were not an option on a Boss 429 and were hidden on the 1970 Mach 1.

Something that wasn’t standard in a Boss 429 nor a Mach 1 was the wood grain steering wheel fitted in the Hitman Mustang; this was actually a steering wheel from a Shelby Mustang – a nice little touch from the producers there.

Even if the film crew did want to use a Boss 429 Mustang for filming, it is unlikely they could’ve secured five identical cars that would be cheap enough to risk wrecking (all five Mustangs used in the film were destroyed). Only 859 Ford Mustang Boss 429 models were produced in 1969 and they routinely sell nowadays at auction for over $400,000.

This would have been way over production budget, and also sacrilege in the eyes of any classic car enthusiast. I can’t imagine that anyone would even sell the crew a genuine Boss 429 if they caught wind of what it would be used for! 72,458 Mach 1 Mustangs were produced in 1969, meaning these are easier to come by and I’m sure the film crew would be less reluctant to wreck a Mach 1.

Despite clearly being a Mustang guy, John Wick isn’t averse to other types of muscle cars. When his ‘Boss 429’ Mustang gets stolen he needs another ride. Being an international ex-hitman, you couldn’t expect John Wick to accept a Prius as a courtesy car, so naturally he goes for something inconspicuous and borrows a 1970 Chevelle SS396. It is powered by a 397ci V8 engine producing 375hp and 415lb ft of torque… not a bad replacement, really.

Towards the end of the movie he gets gifted some modern muscle in the form of a 2011 Dodge Charger. Despite being de-badged, we know it’s an SXR hemi Charger with either a 5.7L or 6.4L hemi V8 under the hood, which sadly gets totalled. 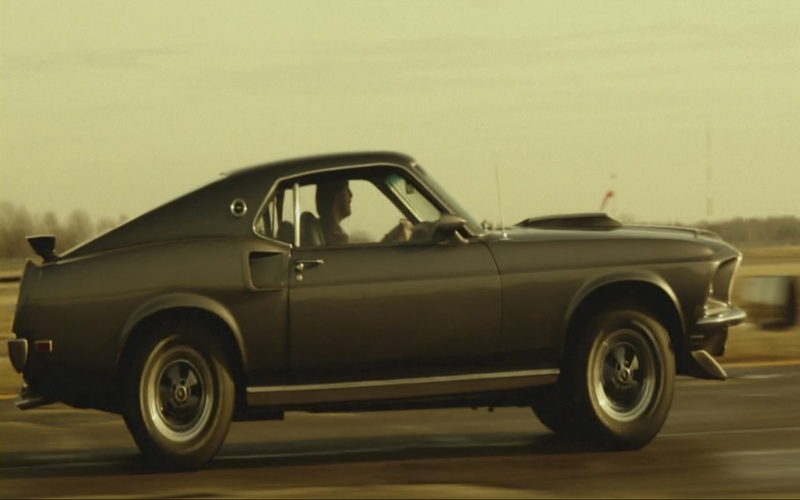 The Relevance of the Boss 429 Ford Mustang

The Mustang is more than just a car for John Wick. We clearly see that it means a lot to him from his wife’s note where she says it’s one of his loves in life. To many, Mustangs symbolise the freedom of the open road, so for John Wick, it is likely to be a type of freedom from his shadowy past. His wife was one escape from his previous, violent lifestyle and it is likely that his Mustang is another escape for him. Anyone who owns a classic car or a muscle car knows how much they can signify an escape; a way to just get away from any troubles you may have.

But why would John Wick choose a ‘69 Mustang? We can see he’s clearly very wealthy from his Bond-villain-style pad, so why would he not choose a modern supercar, or something with sleek German lines?

Instead, he chose something that, while cool as ice cream and bursting at the panels with character, is dynamically flawed, probably creaky and a bit leaky, needs regular maintenance and—let’s be honest—would never stand up in a car chase against that comes near to a modern performance car. I’m glad they didn’t make it compete against a modern performance car, actually, because the film would be over pretty quickly.

John Wick’s Mustang is a testament to American optimism and stylish driving that became a trend in the late 60s. So despite the comparative lack of precision, far from parsimonious fuel consumption and being more than a handful to drive, John Wick chose this car simply out of love. In the same way that the Eleanor Mustang in Gone in 60 Seconds is Memphis Raine’s Achilles heel, the ‘69 Mustang for John Wick is ‘the one’.

When the Mustang is stolen, it ignites a fire in him, bringing back the other side of his personality that he left behind in his old life. Baba yaga, the Boogeyman, is unleashed and propels him to enact his revenge on those who have done him wrong. John Wick can’t bring back his wife or his dog, but he can find his third love; the Mustang.

The Legacy of the John Wick Mustang

Despite the fact that the 1969 Ford Mustang in John Wick only stars in a short portion of the film, there wouldn’t be a film without it. Sure, it could’ve been a different car. And, sure, he drives a Chevelle and a Charger at points in the film, but this Mustang is so iconic to the John Wick trilogy that it just wouldn’t be the same without it.

The Mustang in question is more than just a car, both to the film and to John Wick. It’s not just a lump of metal getting John from A to Z, it’s a companion. This personification by the filmmakers made the ‘69 Mustang one of the most iconic movie Mustangs of all time. Its impact is not just obvious on screen, we can also see it in the classic Mustang market to this day.

The ‘69 Mustang has increased in popularity gradually over the years, its sales no doubt affected by the release of John Wick in 2014. The Boss 429, due to limited production numbers and being an all-round badass muscle car, is one of the most desirable models of Mustang and is incredibly rare.

While you’ll struggle to find a 1969 Boss 429 Mustang in the UK, it is much easier to find a Mach 1. While still rare, they do come up for sale every now and again like this 1973 Mach 1 that is now sold. If you’ve fallen in love with the 1969 Mustang, keep your eyes peeled on our website and social media sites as we constantly are getting new Mustangs in stock so we may have one that’s right for you before long! 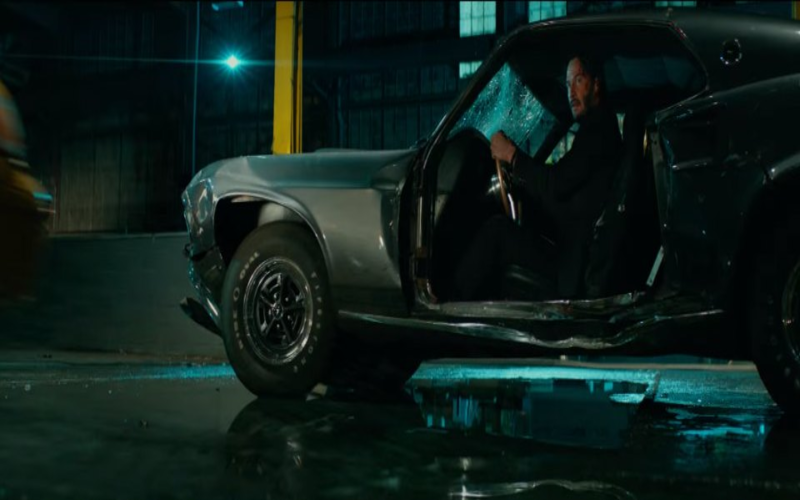 What Year Mustang is Best? 1966 Mustang