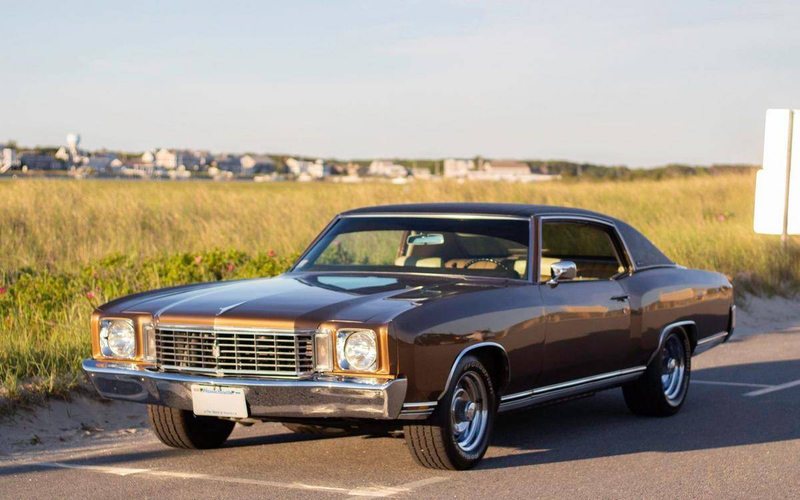 Monte Carlo: a principality that conjures up images of fingers dripping in gold rolling dice and dealing poker chips, crystal clear shores and sports cars twisting through the winding roads of the Maritime Alps. Re-envisaged in the 1800s as an opulent playground for the world’s rich, Monte Carlo has always been synonymous with luxury.

Perhaps it’s a no-brainer then, that Chevrolet named their new-for-1970 personal luxury coupe the Chevy Monte Carlo; a nameplate that remained a fixture of GM’s stable for almost four decades. Although the Monte Carlo is not what we would class as a muscle car, and it is certainly not what Chevrolet wanted this vehicle to be perceived as, the Monte Carlo certainly had muscle under the hood.

Throughout six generations, the car shapeshifted but remained a desirable car, hitting record-breaking sales figures for several model years, and coveted by NASCAR teams. In this classic muscle car review, we’ll take a look at one of Chevrolet’s most iconic nameplates in its history. 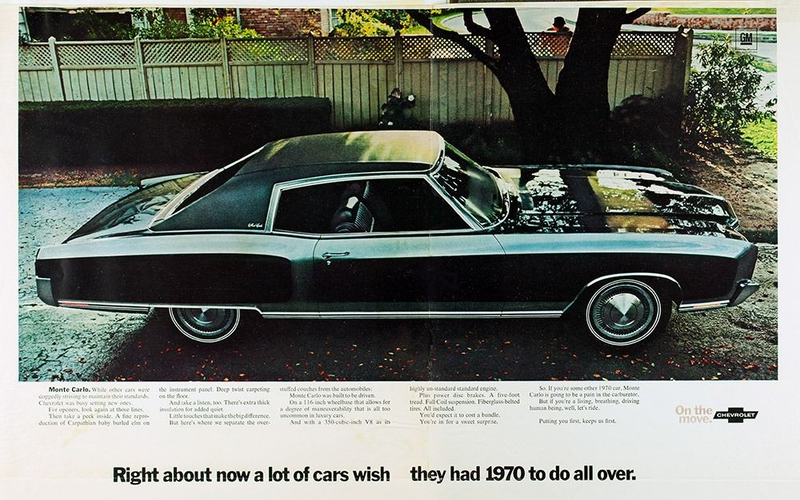 The 1970 Chevrolet Monte Carlo was introduced on September 18th 1969 for the 1970 model year. Initially, the critics weren’t particularly blown away by the Monte Carlo, they were still hung up on the muscle car craze of the late 60s (the Dodge Challenger was also released in 1970). Despite the critic’s reception, the Monte Carlo was a hit with Chevy customers.

It was marketed by GM as a luxury coupe. The Monte Carlo was distinguished by its chromed rectangular grille with a grid pattern (made up by no less than 720 small squares). It had a chrome and red crest with a Corinthian Helmet motif gracing the front of the car. It was based on the Chevelle but had a 116” wheelbase, with the longest hood ever fitted on a Chevy.

For the Monte Carlos engine specs, all variants were fitted with at least a 350ci V8, but any big-block V8 from a Chevelle was also available. The top spec was the Monte Carlo SS454, of which 3,823 were sold. The SS454 variants had a 454ci V8 engine, heavy duty suspension, SS454 specific badging on the sils, rear panels and boot lid, air shocks, dual chrome exhaust extensions and 15” rally wheels.

In 1971, compression ratios were dropped to allow the use of certain types of gasoline as per a GM corporate edict. Despite the reduction in ratings on the 350ci and 400ci motors, the 454ci was raised to 365hp.

The SS454 package was discontinued after this model year, although the motor itself would remain optional in Monte Carlos through til 1975. This was down to GM’s marketing of the Monte Carlo as a luxury car NOT a muscle car. For the same reasons, the 4-speed manual option was discontinued, with 1972 brochures stating ‘Sorry, no four-on-the-floor!’. 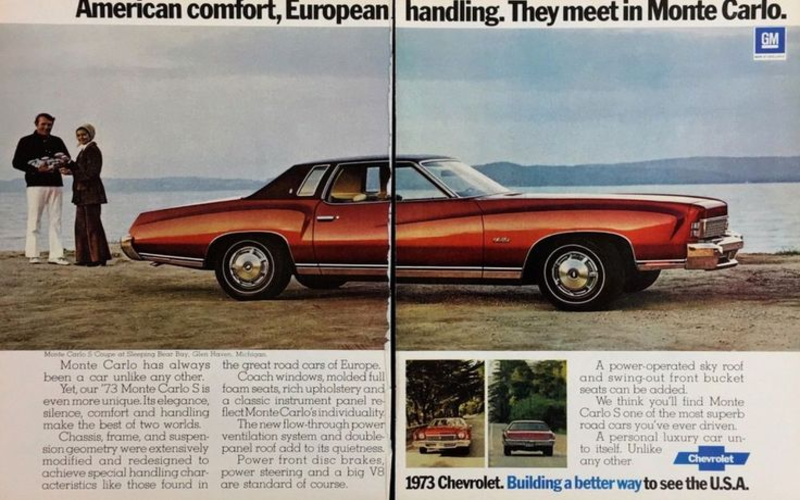 For the Monte Carlo’s second generation it got a redesign; the 1973 Monte Carlo became a pillared coupe with rear side opera windows and frameless door glass. On the basis of its new styling and emphasis on Euro-style ride and handling, this model year was Motor Trend’s Car of The Year for 1973.

The success of the Monte Carlo and Pontiac Grand Prix spurred the other big names in Detroit at the time to release competitor personal luxury cars, including the revised Mercury Cougar, Ford Gran Torino Elite, Chrysler Cordoba, the restyled Dodge Charger and high-line versions of the AMC Matador.

For 1975, power ratings for all Chevrolet engines decreased due to the addition of a catalytic converter. The sales dropped slightly for this model year because of a combination of the higher price (to cover the catalytic convertor) and competition from the Dodge Cordoba and Dodge Charger SE. 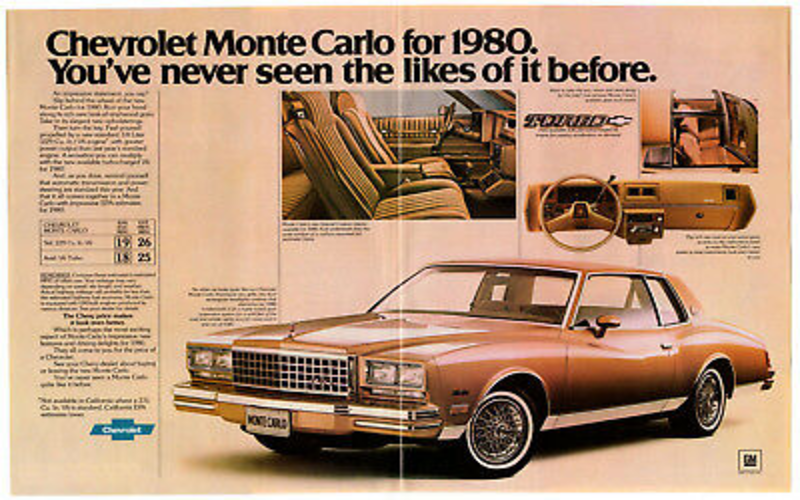 There were only 3 V8 options throughout this generation, including the 350ci Oldsmobile diesel V8. There were 4 V6 options, ranging from 206ci to 262ci. In addition to these engines, there were 13,839 models fitted with the turbocharged Buick 231ci V6. The huge range of engine choices showed that Chevy wanted the Monte Carlo to be a luxury car to suit everyone.

For the 4th gen, the body style was changed from being classed as an A-body to a G-body. The Chevrolet Monte Carlo was restyled to receive a smoother profile alongside other GM mid-size formal coupes like the Olds Cutlass Supreme, Pontiac Grand Prix and the Buick Regal.

After growing competition from Japanese imports, the Monte Carlo was panned in 1988 in favour of the Chevrolet Lumina. This turned out to be a 7 year hiatus. 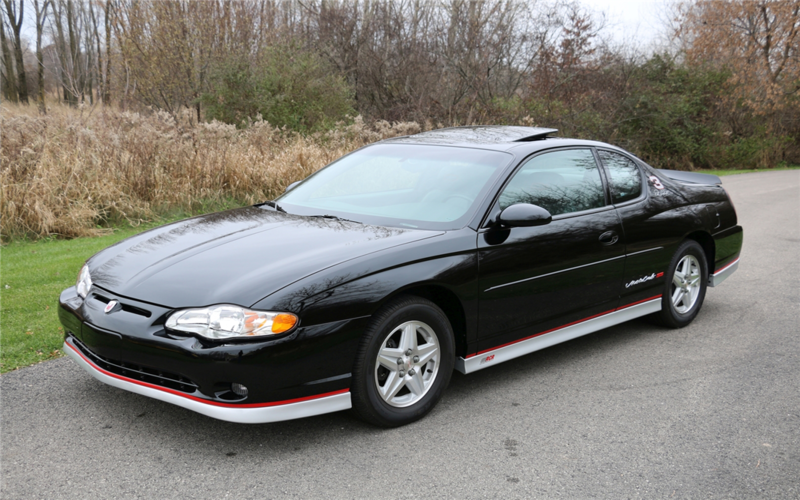 In 1995 the Lumina was split into two models; the Lumina was the sedan, and the Monte Carlo nameplate was revived for the coupes. The LS models had a 3.1L V6 that boasted 160hp, while the Z34 models had a 3.4L DOHC V6 that was rated at 215hp. Whereas the previous generations received incremental changes throughout their lives, the fifth-gen Monte Carlo remained largely unchanged.

For the Monte Carlo sixth generation, GM looked back and drew from past Monte Carlo design elements and called upon GM Motorsports for design inspiration. The revised look had stylised wheel flares, vertically oriented taillights and a stylised rear bumper. The relatively short-lived Lumina nameplate was retired, with the Impala replacing it as the Monte Carlo’s sedan counterpart. It also saw the return of the SuperSport trim level, which replaced the Z34.

This generation had some special variants, harkening to the Monte Carlo’s success in NASCAR. They were all named after NASCAR drivers at the time; for 2001 they released the Dale Earnhardt Signature Edition, for 2003 it was the Jeff Gordon edition, in 2004 there was the Dale Jr. Edition and lastly in 2005 the Tony Stewart edition. As well as these editions inspired by the drivers, there were also limited numbers of replica pace cars produced.

Monte Carlo met its demise in 2007. It was discontinued due to declining sales for coupe models in general and the company’s plans to revive the Camaro. When production ceased on June 19th 2007, the final Monte Carlo was retained by Chevy for their Heritage Centre collection. 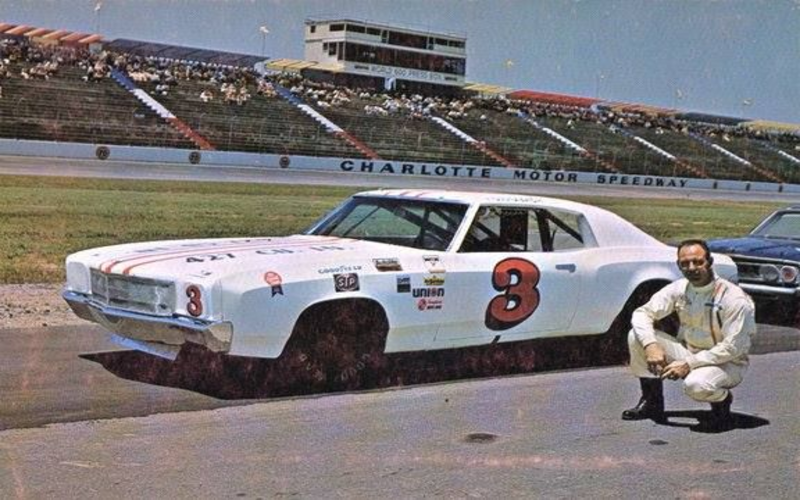 The Monte Carlo wasn’t just popular with the public, it also had a pretty good rep amongst hot rods and NASCAR teams. Ford and Chrysler were ending their factory-backed race support in the early 70s due to declining muscle car sales and the need to divert their funds to meet federal safety emissions regulations. Stock car racers switched from using competitor cars to using Chevrolets due to the greater availability and affordability of over-the-counter race parts through the Chevy dealership network.

The Monte Carlo was considered to be the best suited Chevrolet model for stock car racing by most NASCAR teams due to the wheelbase; at the time NASCAR’s rules stated the wheelbase had to be a minimum of 115”, and the Monte Carlo was 116” (Chevelle’s were ruled out with their 112” wheelbase). The long bonnet design also placed the engine further back for better weight distribution. Because of this, the Monte Carlo became the go-to for NASCAR racing from 1971 to 1989.

In 1983, with the addition of the SS nose (allowed by NASCAR to rival the Ford Thunderbird), the Monte Carlo was the preferable car up until production ceased, when the Impala took over on the circuit. 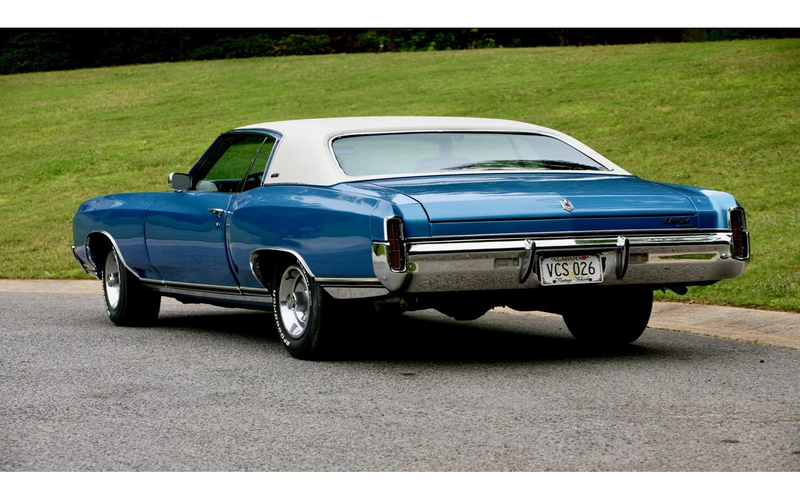 In the first few years of its life, the Monte Carlo was the most affordable personal luxury car in America, hence its record sales figures. The early models are praised by their owners for having surprisingly good handling and suspension for such a big car. These models are also, in my opinion, the best looking of all the Monte Carlos.

Despite the praise they receive, Monte Carlos just do not appear to be a sought after car anymore. This, however, is hardly a surprise when you consider that they live in the shadow of their bigger muscle car siblings. When you think of a Monte Carlo versus a Chevelle, it’s a no-brainer which car a collector or classic muscle car fan would choose.

Because of how popular they were in their heyday, in the States you can pretty much fall over them. However, in the UK, you’d be pretty hard-pressed to find one for sale. I could only find two for sale on Car & Classic for sale in the UK, and they were priced at £12,900 for the 1970 model and £16,150 for the 1976 model. Buying a Monte Carlo would be a cheap way to access the muscle car market, without paying muscle car prices. It’s an unsung hero of sorts.